A Case for Bringing Back the Residential Hotel

Up until its condominium conversion in 2005, Barbizon 63 was a paragon of compact, efficient living in New York City. For most of its life, the building was used as a women’s “residential hotel.” Located on Manhattan’s upper east side, the 23 story building contained 700 tiny units. In the 70s, you could rent a room at the Barbizon 63 for around $160/week (in 2014 dollars). That rent included a furnished single room, bathroom down the hall along with in-house lounges, a gym with swimming pool and a communal dining hall. It provided cheap, safe and clean lodging for women starting out in the city. The names of past residents is a who’s who list of 20th century artistic icons: Grace Kelly, Lauren Bacall, Joan(s) Crawford and Didion, Liza Minnelli and even Ricky Gervais after they opened their doors to men in 1981. 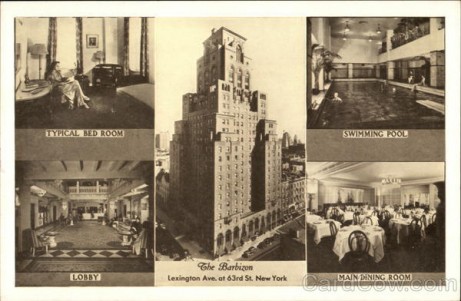 For all intents and purposes, Barbizon 63 was an SRO–a housing type that fell out of favor in the late 70s and 80s. Following a sustained economic downturn in NYC, SROs often become ersatz homeless shelters. Most of the buildings were  eventually converted to standard hotels and later condominiums. As for Barbizon 63, after undergoing a few iterations of hotels, it eventually went condo in 2002. Today, there are 70 units in the building (along with 16 rent-controlled holdovers). The average per sq ft listing price of a condo is about $2600. One three bedroom unit for sale has combined monthly charges of $6200.

Barbizon 63 is far from alone. Across the city, most residential hotels and SROs were converted to luxury hotels or condos. The Salvation Army on Gramercy Park shared a similar fate to Barbizon 63. It once contained 300 units that rented for about $112/week. A condo conversion a few years ago brought the building unit number down to 17. The average per sq ft listing price is a little more than $4K. The building’s smallest unit–a two-bedroom–was listed for $9.8M (in contract) and has about $10K/month of monthly charges.

The above video is by architect Jonathan Kirschenfeld from the 2011 Making Room Conference. He points to these two buildings, among others, and how the demise of the SRO led to the advent of supportive housing–a designation only available to people with special needs.

The fate of these buildings is the fate of New York and many other cities: new wealth creates a high demand for housing, which in turn eliminates affordable housing options and pushes the lower-income folks further and further from the centers of cities.

It’s hard to begrudge developers for capitalizing on market conditions. If a small population is willing to pay a premium for large homes in prestigious locations–often in buildings that had once stood derelict or underused–it’s their job to be accommodating. But these economic realities often yield unfortunate cultural consequences. Many creative folks whose talents might not have the market value of an investment banker are forced to migrate. Alternately, these same people are railroaded into work that pays the bills rather than nourishing the soul. Slowly but surely, a city’s cultural vibrancy is lost.

While we won’t suggest we know the answer to this vexing situation, we will say there’s a real need for housing like SROs, efficiencies, residential hotels, or their modern equivalent, the micro-apartments. Cheap, safe, temporary, often small, housing is a vital component to giving people–young and old–access to cities that are normally economically out of reach.

It’s a bummer what’s going on in Seattle and other places that are opposing micro-housing. Many people–especially young people at the beginning of their careers–just want a place to cheap, clean place to sleep in a decent location. They don’t need fiver burner stoves, walk in closets or in many cases, their own bathrooms. Granted, Seattle’s micro-housing isn’t usually as comely as the stately Barbizon 63 or Salvation Army buildings. But perhaps if micro-housing were to enter the canon of necessary urban housing typology, its architecture might start improving in turn.

But the revolt against micro-housing is often as much cultural as architectural. People are often afraid of the itinerant character of the micro-housing dweller. It’d be great if people started recognizing that that character, is not a threat to property values, but an invaluable component to a city’s cultural diversity.