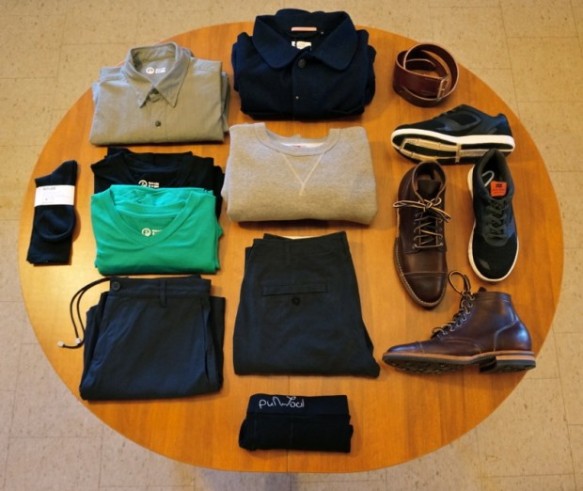 In the past, we’ve looked at Courtney Carver’s Project 333, a minimalist challenge that asks participants to wear only 33 items of clothing for 3 months. Well Canadian Matt Souveny’s 1 Year, 1 Outfit project makes Project 333 look like something out of Keeping Up with the Kardashians (we suspect the K’s have big wardrobes). The Royal Air Force pilot and men’s fashion blogger (interesting combo, eh?) has pared his wardrobe down to 10 items (not including socks, underwear and outerwear). The 10 items include one pair of pants, one pair of shorts, two T-shirts, one button-down, one sweatshirt, one pair of sneakers, one pair of boots, a blazer and a belt. That’s it. Every choice was derived from Reddit’s male fashion advice forum, a place where only the geekiest of dandies dare tread.

If it seems like Souveny has a disproportionate amount Outlier clothing on his short list, it’s not because he’s a spokesperson (so far as we know). Outlier, a small, Brooklyn-based clothier, makes clothes that use the latest in technical fabrics, all cut in fashion forward styles. Their stuff is as appropriate on multi-day backpacking trips as it is in boardrooms. For this reason, the brand has become a Reddit darling–it’s also a personal favorite of this author, who owns a number of items on Souveny’s list (Full disclosure: in more youthful times, I was one of their first models. That’s me below in a super sketchy photoshoot sprinting through traffic on 5th Avenue without a helmet). 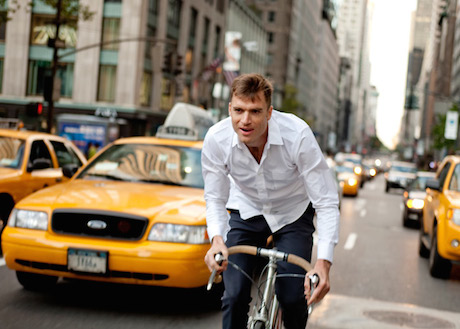 I don’t have any personal experience with the other brands, though I’m a fan of merino wool in general for its wicking abilities and BO funk-resistance. Of the other brands, I’m confident their merits have been scrutinized and overanalyzed by Souveny and many others on Reddit. 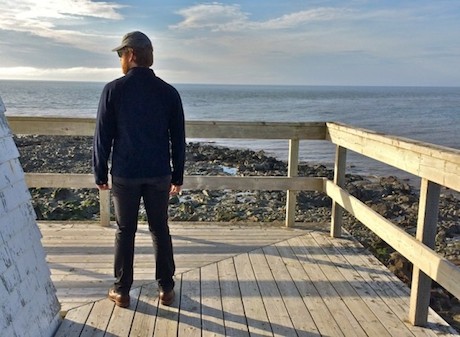 Some note of Souveny’s circumstances should be made. He is on a nine months leave from work, living in a 600 sq ft cabin in the woods (for the record, his main place is 2500 sq ft and he claims no “minimalist” cred). And when he does go back to work, he wears a flight suit, which I suspect he won’t count as an additional item. While he might not have to contend with work attire, he will have to contend with Canadian winters–and summers for that matter–making the brevity of items all the more impressive. Ten items living in the tropics ain’t that big of a deal. 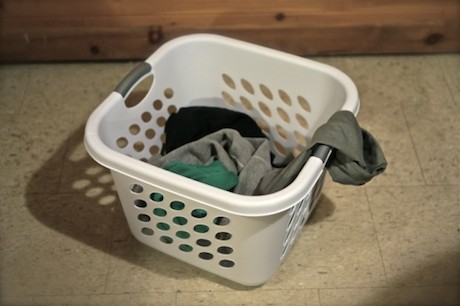 Souveny is chronicling his experiment on his blog This Stylish Life. Here’s some of what he wrote about his first month:

What I have found is that choosing what I wear each day is dictated only by what is clean and the weather outside. If it’s hot it is a shorts day and if it’s not then pants it is. It is that simple, I don’t think about colours, social encounters, or situations that may warrant using a cheaper spare. I put on my American Trench raincoat if it is raining and my Apolis wool jacket if it is cold. It all works together because I designed it with that purpose, I coordinated my outfit once and that is all I have to do for the year.

I have stopped chasing sales online or thinking about how to fill this or that imaginary gap in my wardrobe. It has given me more free time away from the internet and I’ve actually started reading books again, which I haven’t had the time to do for years. I guess I was too busy shopping.

This sounds a lot like the post we wrote a while back about wearing a uniform. Eliminating choice in many situations is a liberating, not restrictive, act. And it does not mean eliminating style or comfort. In fact, when you have fewer things, there’s a greater imperative to make those few things the right things, the ones you love and look great. While we might not all be able–or want–to pare down to ten items, Souveny’s experiment that shows us how, with a little consideration, we can simplify our lives and do more with less stuff.

Image credits: This Stylish Life and Emiliano Granado for Outlier