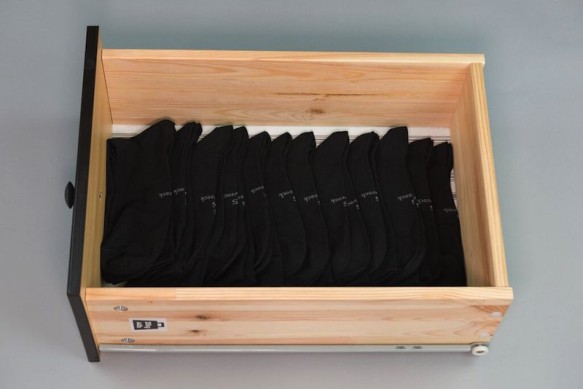 A Better Black Sock (More Interesting than it Sounds)

I can sometimes be a bit of a fanboy when it comes to Kickstarter. I’ve featured countless great projects here because I love the idea of products proving that they deserve to exist before they are manufactured, not after. As such, I get quite a few email solicitations from Kickstarter project managers asking me to write about their campaigns. But not every project is an Unbelievable Testing Laboratory shoe or GOBAG. Many of these folks are presenting products that invent solutions to problems that don’t exist, e.g. the artisanally crafted, leather six-pack holder (no joke). I’ve become pretty accustomed to ignoring most of these emails, which is exactly what I was going to do when a representative of “Oh My Sock” campaign contacted me. They are trying to fund a breathable, odor-resistant black sock. Big deal.

But then I thought again. As I’ve written about here before, I’m a fan of wearing a uniform. And while I’ve written about the more visible constituents of my personal uniform such as Outlier Tailored Performance pants and shorts, I have not written about things like socks. The fact is that even though I have a “sock uniform” my choice of socks isn’t that considered. I wear Champion brand sports socks in the spring, summer and fall (I have wool socks for the winter). I bought about three six packs of them from Target a while ago. I bought them because they’re no-show, which I like, and they come in XXL (I’m a 14), which helps keeps them from getting too stretched. Most importantly, they’re black. Unless your socks are an integral part of your color ensemble, I don’t understand buying anything other than black socks (or underwear, frankly)–white and other colored socks look old and dirty after a few wears, whereas black stays fairly fresh looking. But these socks aren’t especially soft and comfortable and despite the fact they are my size, they wear out very quickly.

Anyway, the “Oh My Sock” sock does what I believe the best Kickstarter campaigns tend to do: it’s a simple, useful, well made and designed alternative to existing market offerings. In this case, socks. Rather than making their socks out of cotton, they’re making them out of Bamboo, which is soft as silk and will keep your feet 14% dryer than cotton and thus more odor resistant. They claim they are more durable than cotton and that most testers have had theirs for six months without any blowouts. They come in three sizes so they don’t bunch up for small feet or get too stretched out for big ones. And they’re the right color for avoiding staining and for perfectly matching up pairs post-laundry. The campaign socks are normal height, but a project representative told me they will offer other heights after the initial campaign is funded (also other colors, but I don’t think they should).

Speaking of funding, after one day of campaigning the project has met $5400 of its $7500 goal, so it looks like other folks are into the idea of a better designed sock. A pledge of $39 will get you seven pair, which is on par with a pair of middle-of-the-road dress socks. Delivery is expected for December. See their campaign page for more info.