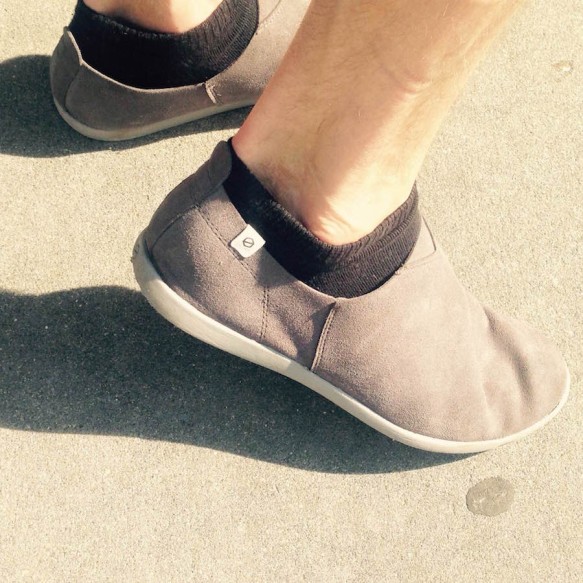 Emptiophobia is the fear of shopping (well, it’s the disorder I invented based on a few minutes on Latin translation sites). It’s a condition, I fear, I suffer from. After keeping this blog for a few years, I have become so shopping averse, so worried I am getting something I don’t need or worried the thing I am thinking of getting is the wrong thing, that any non-food purchases are made months, even years, after my actual need presents itself. One of those needs has been shoes. For a long time now I have been walking around on busted shoes. I was waiting to replace them with the perfect do-almost-everything shoe–a shoe, it was starting to seem, did not, nor ever would, exist.

Before I get to the review, let me bore you a little with my shoe history, because it’s relevant. Several years ago, I got into minimalist shoes and running. As many do, I started out with Vibram Five Fingers KSOs. I eventually ditched them because they provided too little protection (read: fractured metatarsal), they fell apart on me fairly quickly, they smelled awful after a couple wears and I became a little tired of explaining my shoes to strangers. Overall though, I liked having my feet free of too much support and structure, so I traded the KSOs for Merrell Trail Gloves, a more conventional looking minimalist shoe that allowed me to wear normal socks, thus avoiding the stink issue. They had bomber construction and more rubber on the soles than the KSOs, providing more foot protection and durability–a good thing for an active 185 lb guy like me. The only issue I had were the looks. When I bought my first pair of Trail Gloves, I wasn’t too crazy about the looks–too many stripes and logos. Somehow, many minimalist shoe manufacturers think their buyers want tons of design and big logos emblazoned on their uppers. At least in my case, they are mistaken. As Merrell released the Trail Gloves 2 and 3, the looks and colors became even more elaborate making them inappropriate for anything other than kicking around or the gym.

In thinking of stylish replacements, I considered Vivobarefoot, but they run wide and voluminous. When you have long, narrow, low volume feet like I do, wide, high volume shoes tend to look like gunboats attached to your legs, so those were out.

Prior to all this minimalist shoe stuff, I wore Converse All Stars. I actually love their snug fit and they have zero drop from heel to toe, somewhat mimicking minimalist shoes. I also think they look great, even wearing them with formal attire on occasion. Following the Merrell’s, I started wearing an old pair of All Stars I had sitting around (actually, they were made by a company Ethletics, an ethically made All Star knockoff that Converse has since put out of business). But then I was reminded of why I stopped wearing them. Their heels wear out in weeks. Their uppers tear after a few months. They are pretty heavy. They absorb the slightest bit of moisture. And since becoming a father of two, tying their laces has become increasingly inconvenient.

So there I was, wearing my holes-in-the-soles Converse knockoffs, looking for a minimally structured, lightweight, simply-styled, low-volume, durable, ideally slipon shoe. I had been looking for the best part of a year with no luck.

A couple years ago, I wrote about a Kickstarter project called Unbelievable Testing Laboratory. They were trying to bring to market a high tech, Tyvek uppered, super light shoe. I liked their techiness and light weight, but wasn’t hot on their styling and they weren’t offered in a 14. I hadn’t really thought about them since then. But a couple weeks ago, I got a Facebook ad for their new Ninja Kick shoe (go cookies!). It appeared to be everything I was after. They weighed 130 grams per size 11 shoe (less than ½ pound per pair), they had a minimal, no drop sole, they were simply styled, they were available in slipon and in size 14. Hell, they were even machine washable! I immediately emailed them to get a free pair to demo.

They never responded, so in a testament to how promising I thought they were, I bought them. Full retail price!

I have been wearing them now for a week and I gotta say I really like them. In my experience, buying shoes online is a dodgy proposition, so I guess I lucked out. The size 14 was true to size and because they run on the narrow side and fairly low volume, so they fit great and don’t make my feet look any more sasquatchy than they already are. They are light as hell. Their outsoles are minimal but not so minimal that you feel every dirt particle underfoot like the KSOs; the soles are also substantial enough to use with bike pedals. And the outsole’s EVA rubber hasn’t shown any appreciable wear despite near constant use. They claim their insole is anti-microbial and anti-odor so I went sockless for a few days in very hot weather and amazingly they didn’t stink up (I went back to socks to be on the safe side). In contrast to Converse’s canvas, the suede-like microfiber outsole is water repellent and seems very durable. And probably more important than it should be, their minimal design is matched by a minimal look (take note Merrell and New Balance). I would feel totally fine matching them with slacks.

I’m not sure if I can cite any demerits. I’ve been reluctant to work out in them as I did with all the other shoes. While laces can be annoying, they are good at gluing foot to shoe and I’m not sure if I trust the Ninja’s foot-shoe connection. The Ninja actually comes in five different styles and I could theoretically get the lace-up Franklin style for workouts. I’m actually hankering for the Chukka’s for dressier ocassions (though 14s are not available yet).

At $64 for the Kick, the price is reasonable and less than all the aforementioned shoes, less the Converse. Moreover, UTL claims the Ninja line, all of which are constructed of only eight components, uses 60% less material than conventional shoes, so there’s that.

While it might be a little premature to say, given their combination of fit, weight, durability and style, I think the UTL Ninjas will become a permanent fixture in my uniform. Go to UTL’s site for more info.