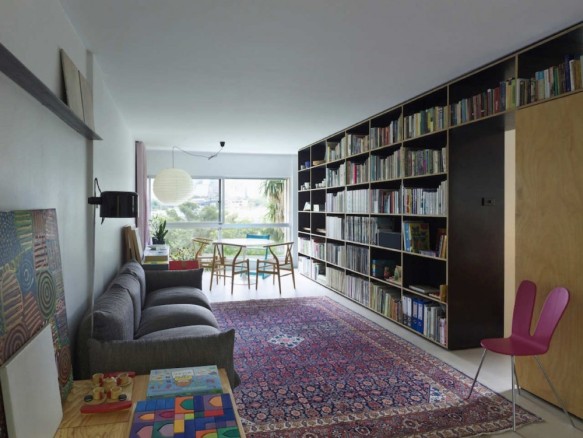 How to Make a One Bedroom Apartment Work for a Family

Most parents rise before their kids and go to sleep after them (on good days, that is). When this is the case and size is at a premium, making a living room that doubles as a parent’s bedroom can make a ton of sense, eliminating the need for an extra bedroom without much sacrifice in privacy. Such was the choice Australian architect Anthony Gill made when renovating his 410 sq ft (38 sq m) one bedroom apartment in order to make it more accommodating for his young daughter.

The apartment’s previous layout included a normal sized bedroom. In his renovation, Gill significantly shrunk that bedroom, which would be given to his daughter, and enlarged the living room, which would double as the parent’s room.

The parents use a trundle bed nestled in plywood cabinetry. Trundle beds are somewhat rare–excepting the occasional daybed–because they require a large recess where the bed stows away; this is opposed to a wall (Murphy) bed, which fits against most any wall. We think Gill’s choice of sacrificing a couple feet of his daughter’s overall floor-to-ceiling height a good one. After all, kids are small. What might seems like a short-ceiling to an adult, might be cavernous to a kid.

Budget was of great importance in the renovation. The kitchen and bathroom remained in their original locations, obviating the need for expensive plumbing reorientation. And materials were selected for their thrift as well. Gill wrote in ArchDaily that “The shelves and kitchen are constructed from form-ply (low grade pre-finished plywood used for concrete formwork) and the wardrobe/bed block is hoop pine plywood with a beeswax finish.” The open shelves provide a ton of storage and a nice, lived-in quality to the otherwise sparse space.

We’re not exactly sure how Gill’s daughter will fare in her little sleeping area as she gets older, but the needs of a family with a young, small child are very different than those of one with an adolescent. In other words, I’m sure Gill and his wife will cross that size bridge when they get there in five or so years. In the meantime, their apartment looks highly functional, clean and affordable–things that make families work just as much (or more) than tons of room for everyone.

Via Remodelista and ArchDaily