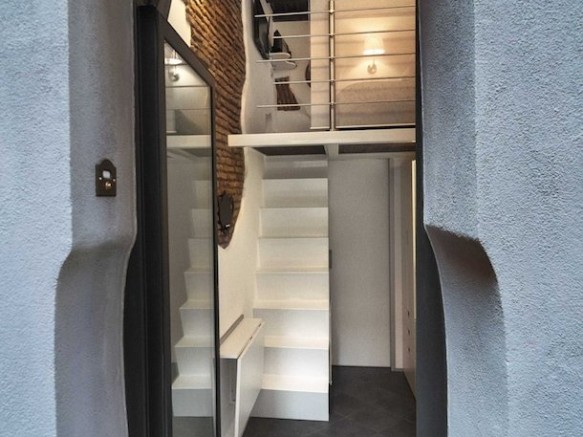 We’ve seen some pretty damn small apartments on this site. There was Felice Cohen’s 90 sq ft studio, Steve Sauer’s 183 sq ft triplex and countless tiny houses, the latter of which rarely break the 200 sq ft mark. But this 75 sq ft apartment in Rome might just take the prize for smallest home we’ve ever seen. The tiny space houses an actual kitchen, bathroom, dining area, a decent amount of storage and a loft for sleeping and lounging loft.

The space, which is minutes from the Pantheon and Saint Peter’s Square, dates from the 1700s. It was sitting fallow for years before architect Marco Pierazzi decided to buy and renovate it. He and his wife lived there before the birth of their child.

The space actually looks fairly livable. The kitchen is surprisingly functional looking. The stair/seat is very clever. The upstairs lounge looks quite cozy. The bed…well the bed might be a nightmare. Given that the opened bed covers the trap door that provides access to the rest of the space (see: bathroom), we wouldn’t want any late-night or early morning trips to the loo. Perhaps this is not an issue for those more gymnastically inclined and can hop over the railing.

While not a someplace I’d want to live in for a sustained period of time, the dinky space is a testament to the power of design, turning a space that most would consider only worthy of housing a dumpster into a pretty functional dwelling.