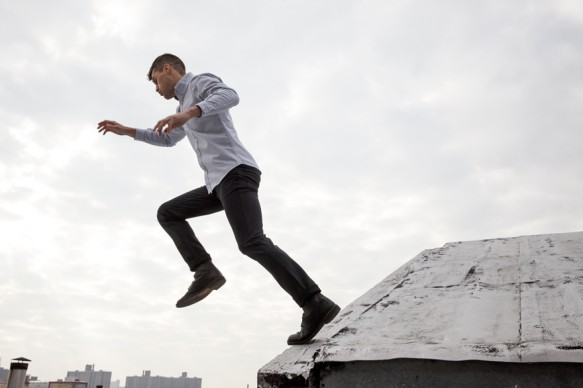 The Business of Selling Less

In 2009 I attended a conference where I struck up a conversation with two guys who had recently launched a men’s fashion label. Their names were (and are) Abe Burmeister and Tyler Clemens and their company was (and is) Outlier Tailored Performance. At the time, they were focused primarily on making great looking men’s clothes that would work well for cycling. The line consisted of a few pairs of pants and a couple shirts made of fabrics normally reserved for mountaineering gear. Unlike most dressy, fashionable clothing, their stuff was wicking, water-shedding and stain resistant. Most of their pants used four-way stretch materials, making it super easy to pedal or perform any other activity. As an added bonus, their stuff was made in New York City by people earning living wages.

I mentioned that I used to be really into cycling and that I had a cool bike. They asked me if my bike and I wanted to do some modeling in exchange for some clothes (clearly they were bootstrapping it at the time. Thankfully, they now employ real models). I have since become something of an Outlier devotee. In the six years, I have replaced most of my pants, shorts and, to a lesser extent, shirts, with Outlier stuff. Their styles are super simple, which also happens to be my style. Their stuff fits great. I take comfort knowing it is not made in sweatshops. And it is the most durable clothing I’ve ever owned. I’ll regularly wear a pair of shorts or pants for four days straight and they won’t look or feel dirty (it’s why a guy who wore one outfit for one year chose so many Outlier garments). In short, their stuff allows me to do more with less.

In the last six year, some things have changed at Outlier, others have not. They have grown as a business. When we first met, their warehouse was in their living room and their stuff was perpetually sold out. Now they have a couple large spaces in Williamsburg, Brooklyn and a good sized staff. They have expanded their offerings considerably and are no longer focused just on cycling–though their stuff still works great for cycling. But unlike many companies that achieve a modicum of success, they have not sent their manufacturing overseas. They are also now a registered B-Corporation, a type of business that must adhere to rigorous social and environmental performance standards. And they are still committed to selling less, but better clothes. It’s a mission that greets you when you open their website: “Quite simply Outlier is about owning less.”

I shot Abe a few questions to talk about Outlier and the business of selling less, but better clothing:

DF: Tell our readers a little bit about Outlier and what you stand for.

AB: We are trying to invent the future of clothing. Basically we believe that what we wear should be liberating not constraining, and that means making clothes that let you do more while owning less. To put it in more concrete terms we make things like pants that are both more durable and more comfortable yet still look great so you are happy wearing them every day. Or shirts that stay cleaner and resist odors so that you can wear them longer, wash them less and carry less stuff when you travel. A lot of it is built around the idea that what you put on in the morning shouldn’t restrict what you do with your day, you can go to work or summit a mountain in the same clothes.

DF: How has your company evolved since you first started?

AB: Well when we started we only made a single style of pant, and now we are a full fledged clothing company making various shirts, pants and outerwear so it’s been a big evolution. We’ve also got a lot broader in our focus, the very first couple garments were oriented around bike commuting, but we very quickly realized that focus was constraining and there was WAY more you could do with our goods.

DF: You write on your site, “Quite simply Outlier is about owning less.” I feel like your site used to a be a bit more atmospheric. What prompted this overt mission declaration?

AB: We’ve had our basic philosophy posted on our site for a long time and two of the core tenets are “the world does not need more design it needs less” and “one well considered object can take the place of many cheaply made ones”. We just got those two sentences combined into one shorter and sweeter one now.

DF: Some people see some contradiction between minimalism and commerce. They think, “How can you sell more to have less?” What would you say to that charge?

AB: This makes zero sense to me. We are trying to sell higher quality goods, which means that they are actually putting more into economic circulation then a bunch of low margin goods produced by subsistence level workers. In GDP terms five cheap items at a 1x cost adds the same amount as 1 quality item at a 5x cost. But that ignores the sort of multiplicative effects you get when people are paid properly and thus able to participate in the broader economy in a real way. The less time people spent on subsistence level events the more time for more creative and interesting endeavors. And this reflects all the way through the lifecycle of an object, from the workers having more free time and money all the way through to the final buyer needing to spend less time thinking about what to wear.

DF: Do you see minimalism as a fad or a real alteration in the way people consume?

AB: We don’t really think about this sort of stuff, we just focus on doing what we see as the best path. We’re not out to judge other people’s lifestyles and paths, we provide an example and opportunity for people to live a certain way, but it’s up to them to decide how they want to proceed.

DF: By conventional standards, your clothes are pretty pricey. What would you say to someone who might not want to spend the kind of money you charge for your clothes?

AB: There is a massive difference between what something costs and what sort of value it delivers. We don’t believe in compromising, we make the absolutely best possible goods we can and then we spend a huge amount of effort trying to make them as reasonably priced as we can. This means they cost a lot more than the disposable type clothing that some many companies pump out nowadays, but if you extrapolate our prices over the lifecycle of a garment you’ll find that our stuff is actually a much higher value than most of the alternatives.

DF: What’s next for Outlier?

AB: We just try to keep learning and subtly improving the world around us.