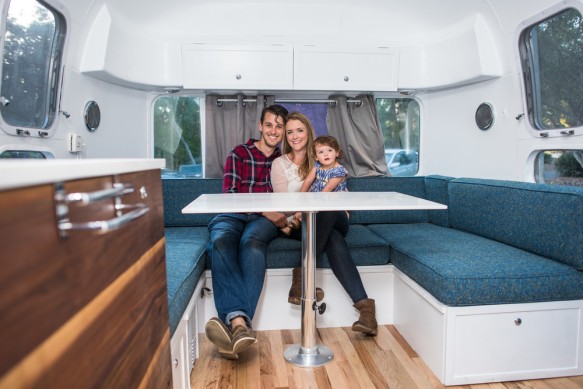 Three More for the Road

Many people think about stopping their workaday lives, downsizing and lightening their loads to support more adventure and freedom. But few people go through with it. We always have (valid) excuses. The time is not quite right. We’re on the verge of a promotion and can’t quit or change our jobs now. We have kids and they will not adjust well to change. Etc.

Fortunate for us, the MacMannis family are not thinkers (meant in the best possible way). Like many of us, they found themselves living a great but harried and stressful life, working too much and spending too little time together. Rather than doing more of the same, hoping things would get better, they stomped on their existential brakes. For them, putting on the brakes meant quitting their jobs, moving out of their home, ditching many of their possessions and hitting the road to live out of their 170 sq ft rehabbed 1973 Airstream–embarking on a trip of indeterminate length. We caught up with them to get a brief history of their adventure as well as find out how things are going.

DF: Tell me a bit about yourselves.

Gillian MacMannis: We are the MacMannis family–Gillian, Sean and one year old Avery June. We’ve spent the last 8 years working in technology in San Francisco. We met at work (and fell in love) shortly after moving to the Bay Area.

DF: What was life like before you hit the road?

GM: We had a great–albeit somewhat chaotic–life before we embarked on our journey. An awesome condo in Bernal Heights with a beautiful view of the city, fantastic friends, great jobs. We’ve always felt fortunate for the opportunities we’ve been given and have tried to make the most of them!

DF: What happened that prompted you to travel?

GM: We got to this point at work where we were working 60 hours a week, running around just going from one thing to the next. Being at home wasn’t relaxing or restful. Work was less fulfilling than we were accustomed to. We needed a reset; and thought some time away would help us to get back to what mattered most for our family. 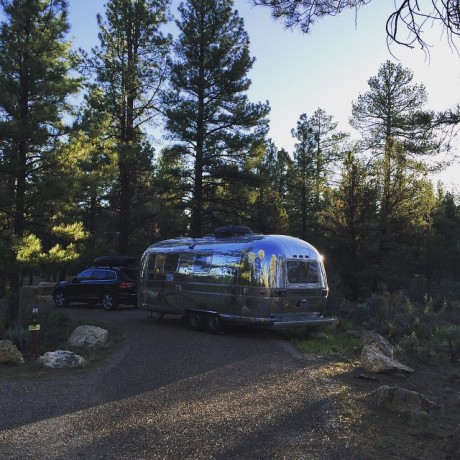 Since we started dating, we have talked about taking time off between jobs to travel. We realized that would never happen naturally, so we got to the point that we thought, “we can keep making excuses about why now is not a good time, or we can just do this now.” We felt like in 30 years we might regret not doing it, but we certainly wouldn’t regret taking a few months to see the country. So we took the leap.

DF: Many people would be freaked out with such a decision. What was the decision like?

GM: Honestly, we had so much to get done before the trip that we didn’t have a lot of time to freak out about the trip itself. Everything from when to quit our jobs to where to put our stuff to how to find a trailer to where we were going. There was certainly a lot to think about, but it was actually one of the most exciting times just thinking through all the possibilities. Once we got into the Airstream renovation though, we definitely felt at times that we were in over our heads. Basically, we realized how much we didn’t know about RVing!

DF: What did you do with your house and stuff?

GM: Most of our belongings are in storage back in the Bay Area, a small fraction of it is with us on the trip and some is living with family members for the time being. We tried to purge things as we packed. The Airstream is only 170 square feet, so we really only had room for the absolute basics.

DF: What was the reaction of family and friends?

GM: All of our friends and family were really excited for us, and actually we were pretty surprised by the lack of negative reactions. We had quite a few friends who said they’d thought about doing the same thing, or who wanted to once they heard our plans! Those who had kids were even more supportive, and could identify with the desire to travel and spend more time with your kids while they are little, though some thought being in such a small space was pretty brave (stupid?).

DF: Tell me a little about your Airstream and your setup in general.

GM: We have a 25’ 1973 Airstream Trade Wind that we completely gutted and rebuilt with Townsend Travel Trailers in Santa Barbara, CA. The original floorplan was a little funky, so we moved the bedroom to the back, created a separate, galley bathroom, and built a convertible dinette in the front kitchen. Knowing we would be living in the trailer full-time, we tried to maximize both storage and floorspace. 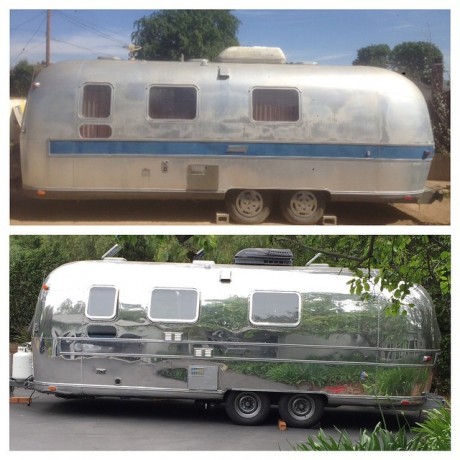 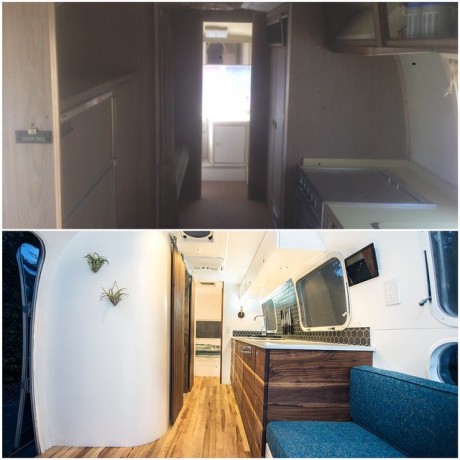 DF: When did you leave? How’s it going?

GM: We left our jobs in April and moved to Santa Barbara to manage the rest of the Airstream renovation. We finally hit the road at the end of May, so we’ve been traveling now for about a month. So far it’s going well–we’ve gotten past the point of being complete novices to the RV world, and have racked up over 3500 miles already.

DF: What has been the hardest part of living like this?

GM: The hardest part has been the heat. It’s RV off-season for a reason, and we certainly didn’t make it easier on ourselves by heading south (we had family to see). We really didn’t know anything about RVing before heading out on this trip, so we were hit by a few surprises early on. Now that we are more familiar with the “quirks” of life on the road, we can plan a bit better. For example, we discovered that our refrigerator really doesn’t work well in the 90+ degree heat. So now we make sure we have a cooler of ice on hand and we can switch food items back and forth for days we are on the road.

DF: What has been the best?

GM: The best part has been the flexibility. If it’s too hot, or we feel like there is something else we want to see or do, we can just go ahead and do it. The most interesting and amazing things we have seen have been unplanned.

DF: How long do you intend to be out?

GM: We are leaving our timeline open. We expect to be on the road at least for a few more months, and we’ll decide on the road when we’re ready to start thinking about what’s next.

DF: I realize you haven’t been traveling all that long, but based on your journey so far, what words of wisdom would you give people who might feel trapped in more conventional situations?

MG: Our biggest fear was feeling “trapped” or handcuffed into a situation by overspending or overcommitment. Looking at buying a house in the Bay area and the prospect of taking on a big mortgage with the housing market as crazy as it is in SF was daunting to us and pushed us to think taking this trip wasn’t such a big risk after all. Obviously, shedding everything and moving into a small travel trailer is a bit extreme for most people. But living more mindfully, and thinking about what you bring into your life can really have an immediate impact on your happiness. This trip has really helped us to better understand what we actually need versus what we thought we needed.