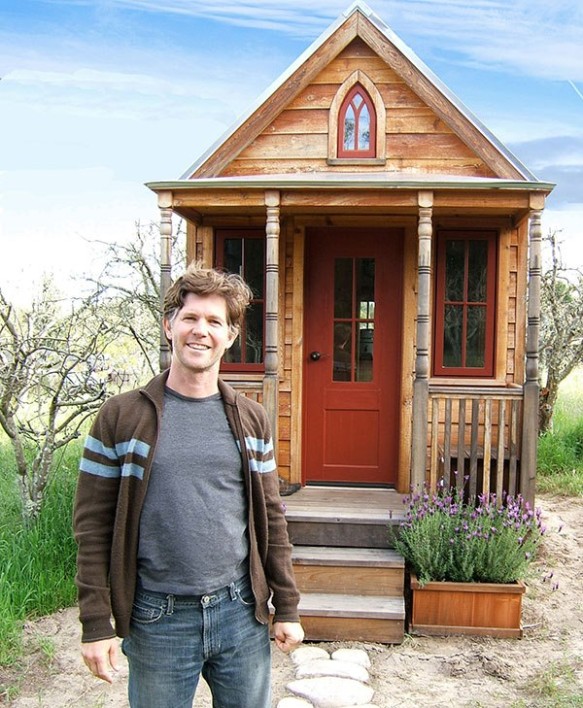 Talking to Jay Shafer About Making the Universal House

Few names are as closely associated with small living as Jay Shafer, the man who practically invented what is now known as the tiny house. Tiny houses have become a minimalist design and lifestyle ideal. Their tiny size permits no extraneous stuff. They occupy a fraction of the spatial and carbon footprint of a normal home. They are usually owned outright, sidestepping expensive mortgages and financial institutions. And by virtue of their trailer mounting, they can often avoid traditional building regulations.

Jay invented the species back in the late nineties after he wanted something more suitable for year-round habitation than the 100 sq ft Airstream he’d been living in for a couple years. After his tiny house was awarded “Most Innovative Design” in Natural Home Magazine’s 1999 House of the Year Contest, the idea that he could make a living designing and building little homes was born. He founded Tumbleweed Tiny House Company and the rest is history.

Though there may be public indications to the contrary, Jay has not been with Tumbleweed for a couple years. We spoke to Jay about what happened with Tumbleweed, where the tiny house concept started and his new company’s Universal House (U-House), which might point to where it’s all going.

David Friedlander: What happened with Tumbleweed?

Jay Shafer: I took on a business partner a few years back. He was a money guy, I was the design guy. It seemed like a match made in heaven. As our relationship progressed, it became clear that this wasn’t the case, at all. It turns out that his means of growing the company’s bottom line and my own goals to grow a movement and improve on my designs were at odds. Our interests collided, so we split.

DF: Let’s step back a second. How did you get into building tiny houses?

JS: I never set out to design tiny houses. I set out to build an efficient house. When I took out all of the unnecessary parts of the house, it turned out to be a very small house.

I am also high on the Asperger’s scale. I am the kind of person who goes into public restrooms and tries to improve their design. I wanted a home I could control. I wanted a house where everything was useful and meant something. And if it didn’t mean something, I could give it meaning.

The house was mounted on a trailer, so it was technically an RV, but I wanted to make something with universal appeal. Something that would be house-like in proportions and not perceived as a trailer.

I never set out to design tiny houses. I set out to build an efficient house. When I took out all of the unnecessary parts of the house, it turned out to be a very small house.

Also, I always wanted to be architect, but couldn’t afford the education, so I went to art school instead. After the house got some attention, I thought ‘wouldn’t it be great to do this all the time?’ And that’s how Tumbleweed was born.

DF: Why do you think they’ve become such a sensation?

JS: There are so many reasons, but I think it comes back to nature. In every area of nature, efficiency is the law of the land. Efficiency just makes sense. The only thing I know of that doesn’t abide by efficiency is the human ego. 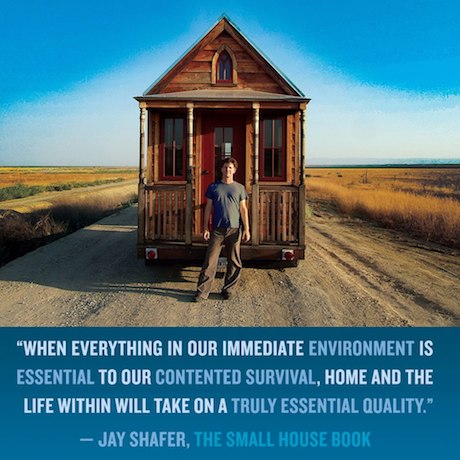 DF: We tend to be urban in our sensibilities at LifeEdited. There’s a certain efficiency living in high density areas. While there are some urban exceptions, most tiny houses are set in the country, which usually means cars, highways, sprawl . Even though a tiny house might be very eco-friendly, their setting might not be. Any thoughts on this matter?

JS: I have never subscribed to the arbitrary distinction between tiny houses and apartments. Apartments definitely have greater efficiency due to their multiple floors and shared walls. When I first started, I used to photoshop tiny houses onto city rooftops.

But I think small houses work best in concert with other small houses. When I lived in my Airstream, I was six miles outside Iowa City. Even though I’m a total introvert, this was too far away from civilization for me. And the driving wasn’t sustainable.

I think the best setting for a small house is near center of town and amenities. My place is three minutes from Whole Foods, for example.

DF: What type of house do you live in, now?

JS: It’s a, relatively palatial, 500 square foot house shared by four people: me, my wife and our two small children. I call it the “bunk house.” I’ve never defined small houses in terms of square footage, it seems like efficient use of space would be a more useful way to measure this stuff. 20 people could share a 4000 square foot house and you could call it a small house.

I also have a 120 square foot house in the back where I spend most of my waking hours working on upcoming projects.

DF: What are you working on?

JS: We [Four Lights Tiny House Company] are working on something we call the U-House [working title], which stands for Universal House. It’s a house that can be built and zoned as a modular, a park model RV, manufactured housing or as site built housing. 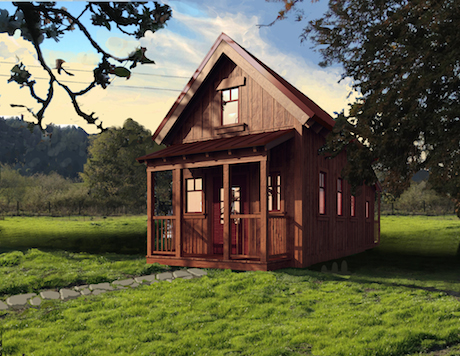 I’m always asking myself, “What would nature do?” if it were designing this house. I wanted to design something that didn’t adhere to tradition for tradition’s sake or innovation for innovation’s sake but addresses the most universal human needs as efficiently as possible. What I came up with was something both traditional and innovative. For example, I realized I really like plywood, so I use a lot of it where you might, otherwise, expect to find drywall or wood paneling.

It’s completely prefab, and in that sense innovative. It starts with a 200 square foot core that’ll fit into a 13′ x 23′ lot. We’ve made an easy-to-attach accessory bedroom. The two buildings together amount to 481 square feet, which includes a sleeping loft and porch space [lot size increases to 13′ x 30′ with accessory building].

It’s designed to work in virtually any climate, but if you live in the Arctic, you’d probably want to get a bigger heater. There’s also a special coupler that will allow you to attach it to existing houses, other U-houses or whatever.

Four Lights will be unveiling the U-House sometime in the next couple weeks. We’re working with a manufacturing partner who’ll be making it possible for us to sell and distribute it more widely and affordably.

DF: And what happened to Napoleon Complex, the tiny house community you planned to build in Sonoma County?

JS: Unfortunately, not much at my end. I’ve spent way more of these past couple years addressing all the S.L.A.P. threats I get from my former company’s lawyer than I’ve been able to spend on my real work. I feel lucky that, after I proposed the village idea to my local zoning officials a year ago, they’ve taken up the cause by writing up about 20 proposals that’ll make building Napoleon Complex easy. One site in particular is really great; it can fit ten units and is right in the middle of town–three minutes from a Whole Foods.