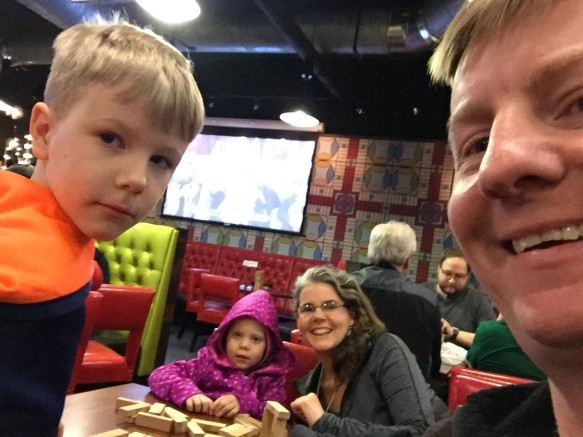 This site is probably too often guilty of presenting extreme minimalist lifestyles–single dudes who give up everything, couples who sell all of their stuff to go globe trotting and so on. The fact is downsizing and living a simpler life with less stuff is not something available only to singles or childless couples. It’s something that can be done by anyone, anywhere. Minnesotan Kati Berg is a wonderful example of this. Through her blog Skywaymom.com, Kati, a wife and mother of two young children, presents a very real and accessible approach to how normal folks–folks with jobs, kids, who don’t live in NYC or San Francisco, who might not be inclined to drop $300K on tricking out their small apartments–can simplify their lives and focus on more important things than managing their stuff.

DF: Tell us about yourself?

KB: My name is Kati Berg. I am a real estate investor and mom, and rookie blogger at Skywaymom.com. Our family lived in a big house in the suburbs of Rochester, MN, but gave it up to bring our kids to Nicaragua to learn Spanish, then a year later moved downtown Saint Paul to continue the walking, slowed down lifestyle we found in Nicaragua and to continue language immersion for the kids, this time Chinese at a public charter school.

DF: What was life like “before” your adoption of minimalism?

KB: Life was good. We entertained in our house. We went to our friends’ houses to be entertained. Typical suburban stuff. When you invest so much in your home you want spend time there.

Life was also hectic. Working full time, a growing business and adding two kids to the mix the house started to feel like a stressor instead of a sanctuary. I’d lose my keys, forget where I put things. I spent entire weekends tidying, cleaning, fixing, staining, mowing, trimming, shopping.

Before minimalism, life was about “setting up” for life. Once we were set up, well, then we started asking the bigger questions…

DF: What were those questions?

KB: We lived in an idyllic neighborhood–tree-lined streets, 2 miles from the city center but with cul-de-sacs and attached garages. The neighbors were close friends, our kids played together. It was safe and perfect and everything we had wanted and wished for to raise a family.

The bigger questions were:

We can give our children anything–is safe, secure and homogeneous the end goal? Was living a life of luxury going to teach them what we wanted them to learn about life?  We wanted the world for them – not just a comfortable corner of it. I realized all that we built, all we had to give, wasn’t what I really wanted them to have. I wanted them challenged and surrounded by diversity, learning multiple languages and cultures.

This was happening against the stressed out background of our lives.  I didn’t know what to do about it, but I knew if we had less stuff we’d be more able to make a change should the opportunity come.

DF: Did you get rid of a lot of stuff in your transition? what did you do with it?

KB: I’m embarrassed to say how much we had. We were practically our own mini-Walmart. Things left the house one Craigslist sale at a time, one car load donation at a time, one garbage can full at a time, one garage sale at a time (we had 3 huge ones and donated the leftovers). Every month for 36 months I thought I had achieved my goal of downsizing our stuff. Like an onion peeling back layers, the unnecessary revealed itself only after the more unnecessary was gone. We purged again after a year away in Nicaragua. Then again after we moved into our small apartment. I’d say we have 80-90% less stuff than we used to.

DF: How did your family handle it?

We used “purgatory” a lot. Especially with toys. We wouldn’t give it away, we just put it away–far away. It was a way to practice living without something. Nothing was thrown or given away that made someone cry.

DF: Was there any pushback from friends, neighbors, etc?

KB: We are still friends with our old friends. We moved to another country and then to another city, so the subtleties of any pushback if they exists aren’t an issue.

DF: Have there been any downsides or challenges to this new way of life?

KB: Swimming upstream is always harder than swimming downstream. It’s bizarre to live in a time and place where having less is more challenging than having more. Still, I feel like I’ve discovered the pot of gold at the end of a rainbow.

DF: What prompted you to start your blog?

KB: When we moved downtown St. Paul I searched for advice on family life in a typical, white walled, beige carpeted apartment and came up short.  I also was gobsmacked that we seemed to be the only family living downtown St. Paul–it’s a toddler paradise (Children’s Museum, Science Museum, History Museum, event centers, swimming pools, parks, bike trails, the river, the library all in walking distance and with the skyways going outside is optional).

I assume Google knows everything and Google didn’t know this. I wanted to encourage other families to join us. My oldest is an extrovert. We need neighbors he can play with. 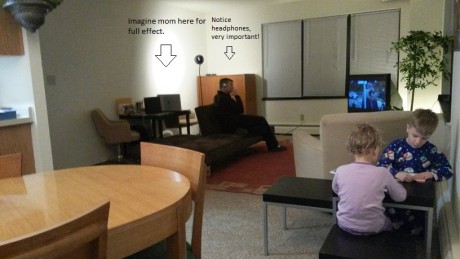 Living small doesn’t have to be about expensive architecturally assisted spaces or tiny off the grid homes. We’ve chosen small as a way to give more opportunities and experiences to our kids–the surprising thing is how much we parents like it too. It took us a lot of time to figure it out what worked for us with less space, but we got it, and hopefully I can help shorten the learning curve for others through Skywaymom.com.

DF: What would you tell people who are trying to do this for themselves and their families?

KB: Minimalism is an excellent tool to focus on what’s really important. Dreams grow when you realize you have to say no to a lot of good things to allow great things to surface.

I developed a mission statement for my house–an inner dialogue if you will–while cleaning.  It goes like this: “My house is a pristine sanctuary that focuses on what’s important”. When I pick up clutter or organize I say this to myself. It has had dramatic consequences. We were able to save the money required, and organize ourselves enough to take a full year to be with our kids in a foreign country. What’s important will be different for each person–but without constantly reminding ourselves what’s important to us, the world, by design, will impose its own version.