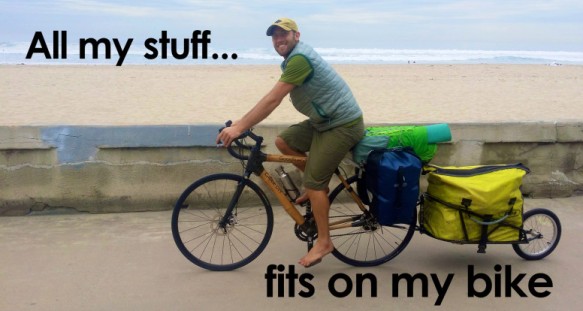 A couple weeks ago, we revisited Peter Lawrence, a man who lives with what would charitably be called a paucity of possessions. In certain ways, Rob Greenfield makes Lawrence look like a hoarder. Greenfield lives in a 50 sq ft “house” and what few possessions he has can stuffed on a bike trailer. On his website, Greenfield says he “is an American adventurer, environmental activist, and entrepreneur on a mission to entertain, educate, inspire, and give back to the world. He is teaching others about the issues associated with food, energy, water, waste, transportation, and health by displaying his style of living to the world. He is leading them towards a greater sense of happiness and freedom.” Sound good to us.

Like many who have fairly extreme-lifestyles, the mostly-nomadic, veggie-eating, non-showering, vasectomied Greenfield is a convert. From childhood to early adulthood, he says he used stuff to boost his sense of self-worth; first it was Beanie Babies then later cars and even a boat. He also writes that his life up until recently prioritized “binge drinking every weekend, looking good, and macking on pretty much every good looking girl I saw.”

Then in 2011, he says he got educated. Though he doesn’t specify what that education was, I suspect it had to do with his environmental impact on the planet. He thereafter “gave up on restrictive social norms and stigmas and embarked down a path of living for the benefit of the earth, my community, and myself.” 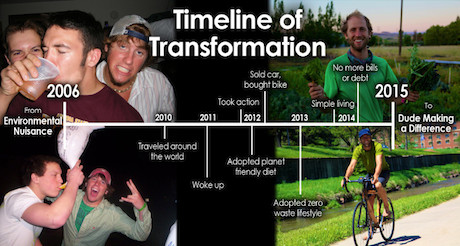 There’s too much on Greenfield’s site do justice to his iconoclastic lifestyle. He’s at once a free-spirited hippy, biking across country in bare feet, dumpster-diving and doing good deeds; he is also a hyper-organized type A personality, publishing a detailed list of life-goals with status reports, writing a blog, producing Youtube videos and running his own online marketing firm, of which he gives 90% of the profits to environmental causes.

His last couple life events include getting rid of his cell phone (his last bill) and buying an off-grid tiny house in San Diego (more of a sleeping shed), where he plans to grow his own food and take the home completely off-grid.

On this site we often feature experimental architecture and products. Often, their main function is to show what’s possible, not present an exact model for places we will live in or products we will use. Greenfield, in many ways, presents an experimental life. Very few are setup to come and go as he does (though he’d probably argue that that’s a choice), but he shows what’s possible–how we can all simplify our lives, live with less stuff, reduce our environmental impact and (most important) be happier and more useful in the process.