Refrigeration for small kitchens can be tricky. Typically, you have your choice of a humongous full-size fridge or tiny dorm-room model. The former tend to be around 80″ and the latter 30″. Often people trying save space opt for the smaller one, whose size, if you cook a lot, is maxed out quickly.

In the quest to preserve perishables, the question may not be how to increase refrigeration capacity, but how to do without it. An article in Treehugger shows Korean designer Jihyun Ryou‘s systems for preserving food without refrigeration.

Many of her solutions are designed around how perishables actually behave–behavior that often runs counter to our suppositions about the need for refrigeration. For example, many fruits release ethylene when they ripen. When we put them in a refrigerator’s sealed box, it actually traps the ethylene and accelerates spoiling. Accordingly, Ryou’s apple storage system exposes apple tops to the open air so they release ethylene. The ethylene serves the other purpose of preventing sprouting in potatoes, so the bottom half of the apple faces a dark box where potatoes are stored. 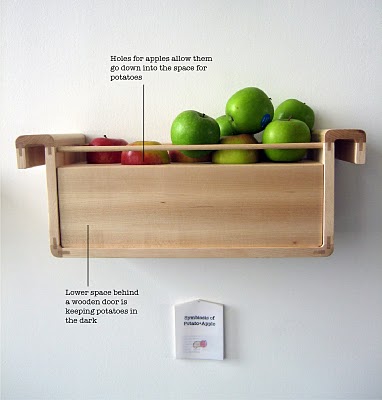 According to Ryou, “keeping roots in a vertical position allows the organism to save energy and remain fresh for a longer time”–so she puts carrots and scallions in wet sand to keep them vertical and maintain optimal moisture. 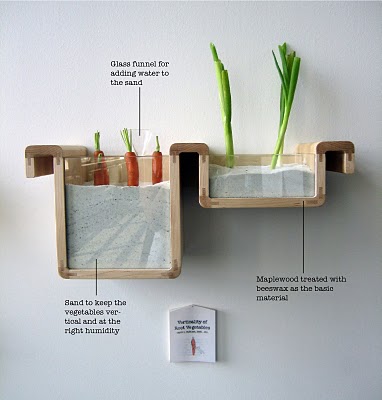 Americans are about the only people who refrigerate eggs; Ryou’s egg storage leaves them out and features a bowl to submerge eggs to test their freshness (a fresh egg will sink). 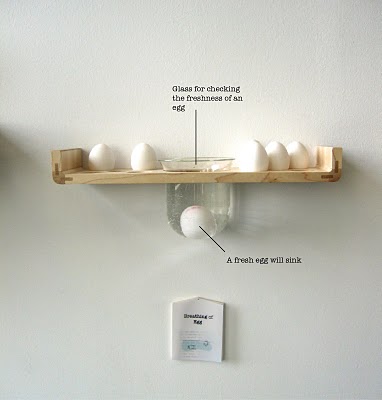 In days of yore, necessity dictated that people learn how to preserve food without refrigeration. While refrigeration is a great thing for many varieties of food, there are many instances where traditional food preservation techniques are equal or superior to refrigeration. Now Ryou gives these techniques a modern spin. She shows how a dorm fridge might suffice for even the most ardent gourmand.

Do you have other suggestions for doing without refrigeration? Let us know.