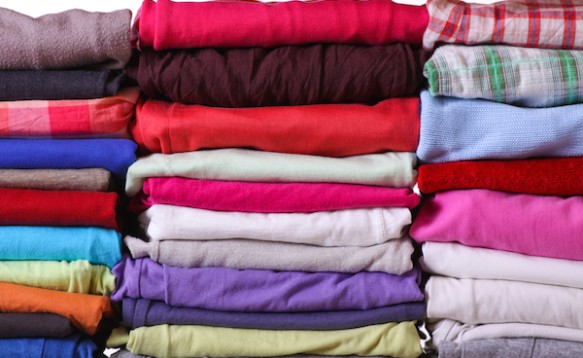 The Best Way to Fold Shirts

I love folded clothes. I love how folding prevents wrinkles. I love how it optimizes space. I love how it makes it easy to see your inventory of clean clothes. But I loathe folding clothes. I find it tedious and time-consuming. In the past, I would gladly hand over $15 to have one of NYC’s ubiquitous wash-and-fold laundromats transform my dirty tangle into clean, orderly columns of ready-to-go clothes. But with an in-building washing machine and a son who tears through clothes at a breakneck speed, it’s tough to justify sending clothes out nowadays. And while my wife has less of an aversion (and more skill) to folding than I do, she’s not always available to fold, which means I often find myself folding.

Let me back up a bit, folding clothes is not uniformly difficult. I find folding pants, towels and mating socks pretty easy. It’s the dreaded shirt (any type) that is my laundro-nemesis. I learned my main technique watching a Gap employee fold a shirt I bought when I was a freshman in high school (i.e. a long time ago). It always served me and my shirts well, but it is labor intensive. The method involves laying a shirt face down, folding the sleeves toward the center, then folding the outside quarter of the shirt toward the center, then folding in half or thirds from top to bottom.

My method appears to be the correct (or at least common) way for folding a dress shirt and, to a lesser extent sweaters, which are bit more forgiving. The above video shows how it’s done. The more fastidious seem to prefer using a board in the center of the fold, which helps cinch the shirt against the board and create a standard size for the shirt.

The other way is the ranger-roll, so-called as it’s the preferred way military personnel fold their t-shirts. It involves folding clothes in toward a six inch center channel, rolling very tightly, then closing off the roll with a crease made at the hem of the shirt. This method is super simple and has a number of advantages: It compacts the shirts as much as possible; it allows various different storing methods, e.g. you could store your shirts butt side up; and it makes t-shirts very portable as there is little way they will come unfolded accidentally. It is however relatively slow to do compared to the pinch method.

This is by no means a definitive list of correct methods. We would love to know your preferred method of folding all clothes and shirts in particular. Let us know in our comments section.