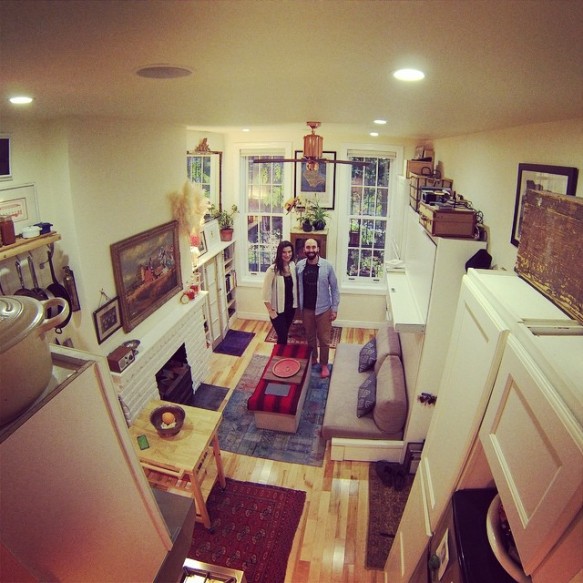 We have a tendency of showcasing sleek, somewhat futuristic small apartments on this site, and while we are quite unapologetic about this, it is by no means the only aesthetic available to small space dwellers. In fact, many of our readers appreciate a more lived-in vibe to their small interiors, and we thought this 242 sq ft apartment in Manhattan’s West Village a nice example of what that can look like.

The apartment is shared by couple Jourdan Lawlor and Tobin Ludwig. The former bought the tiny place a few weeks before meeting the latter, and when things got serious, they decided to throw money into the apartment rather than moving to a larger space. They replaced the kitchen, added cabinetry and bought the Nuovoliola wall bed/sofa from Resource Furniture, which turns the main room–i.e. the only room–into the bedroom. There is also a pocket dining table and bench that pull out of a cabinet. 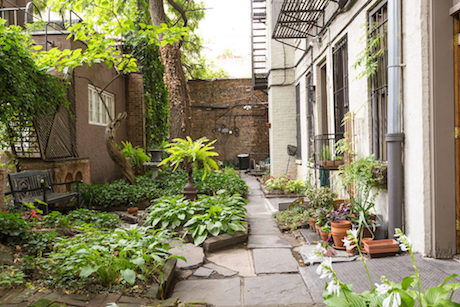 The apartment benefits greatly by its access to a communal garden, which the apartment faces out into. Another perk is its location in the heart of the West Village, a neighborhood that enjoys the split personality of being lively and tranquil (with some block-by-block variation).

Unlike many apartments we feature here, the little space is brimming with art, books, rugs and other stuff people collect over the years. That said, the couple did have to get rid of a lot of stuff to fit into the space together. Ludwig spoke positively of the experience, telling Curbed, “We both culled things we accumulated that we had been hauling from place to place because we could. I don’t feel like I lost anything, but I gained a lot.”