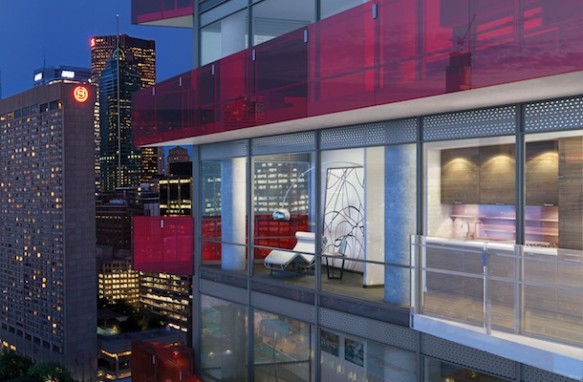 Smart House, a new condo building featuring micro-apartments in downtown Toronto, is hitting the market this month. The 25-story building has units that range from 288 to 778 sq ft, with an average size of 465. Prices range from mid $200s to mid $500s. According to a press release, the spaces have optional furnishings including:

A bed that folds into the wall and becomes a sofa. Or a desk. Kitchen counter space that expands and retracts. Dining tables built into islands. Niche shelving in what would otherwise be wasted pipe space. Integrated cabinetry and smart appliances. Moveable partitions. Storage conjured all over.

The developers Urban Capital say Smart House is for “people who hate clutter. Those who crave privacy when they’re not on the town. Toronto-lovers who know what it means to have the hippest stores, cafés and bars outside their door with Bay Street around the corner.”

We think building a centrally-located, craftily-designed, amenity-packed micro-apartment development in a city with a tight housing market deserves the “smart” moniker. They might not be for everyone, but they may be for many.

Not all Torontonians think they’re so smart however. Many have cried out against their expense and size. Comments from a National Post article say things like “I guess Torontonians have a choice between living like animals in a cage and living like human beings elsewhere,” and “What [sic] did they decide to build this out of the boxes that your refrigerator came in?” These were far from isolated sentiments.

It would be too easy to make a blanket dismissal of the complaints; many have more than a grain of truth. Like any commercial venture, micro apartment development will be beset by profiteering, advertising jargon, questionable code compliance, build quality, aesthetics and so on.

But a number of complaints simply seem driven by logic that’s incongruent with many peoples’ social or economic realities. We thought we’d address the three most common objections we hear:

Objection #1: They’re too expensive for their size.

Most of the objections to micro-apartment costs revolve around relative costs, e.g. “the place down the block sells for $500/sq ft and you’re trying to pawn off this tiny place for $750.” This is fair to an extent, but it misses a big consideration: absolute costs. Let’s take Toronto as an example. Say one of the 288 sq ft apartments costs $250K; that’s $868/sq ft. Now let’s say a comparable boutique condo in the area costs $700/sq ft, but the smallest unit available is 600 sq ft, i.e. $420K total or $170K more expensive than the micro unit. This is likely to be prohibitively expensive for a lot of people, many of whom don’t care about or need the extra space.

Same goes for rent: in Seattle, people rent micro-apartments for their absolute costs, not relative ones. Relatively speaking, these units are higher priced per square foot to other rentals in the area, but no matter the size, there are few (perhaps no) furnished, utilities-included, private, centrally-located apartments you can rent for $800/month. The swelling ranks of Seattle’s micro-apartment renters attest to what’s important to most people: low total cost of housing and location.

It should also be noted that micro apartments have a higher ratio of costly square footage (i.e. bathrooms and kitchens) to cheaper square footage (living rooms, bedrooms). This makes their construction costs higher on a per unit basis than larger apartments.

People often have sticker shock when it comes to square footage. If someone were to say that two people share 600 sq ft, few would be amazed, but one person in 275 is crazy small. Listen, if you’re a collector or pack rat or have a family of four, micro-apartments might not be right for you. Different strokes for different folks. But many people around the world are living contentedly in tiny spaces. In Japan, it’s not uncommon for singles to live in apartments as small as 100 sq ft.

Design also plays a role. A small space can be a cage or a great launching pad for your life. By lifting some of the restrictions on building small, we imagine we’re going to get less of the former and more of the latter.

The main point is square footage is not an objective issue, it’s a cultural one. Whether someone chooses to live that way is up to him or her.

Objection #3: Micro-apartments are for transients 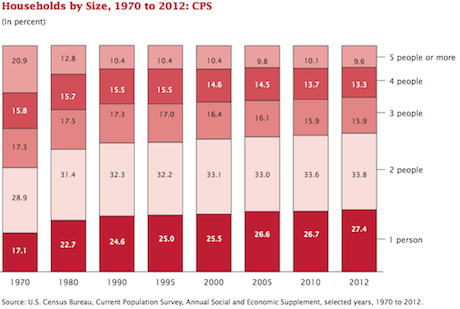 Listen, many couples and even families can live in small spaces. But here’s the deal: micro-apartments (sub 300 sq ft) aren’t for transients, they’re usually for single people who want to live alone. More and more people are choosing to live that way. According to NYU professor Eric Klinenburg, 40% of households in cities like Atlanta, Denver, Seattle, San Francisco and Minneapolis contain a single occupant. In Manhattan and Washington, that percentage is closer to 65%. In the US and Canada, 27% of the population lives alone (numbers that are only increasing), yet in the US only around 12% of homes are one-bedroom or smaller. Micro apartments, in many ways, are a dwelling style more in line with today’s demographics.

Ultimately, whether someone lives in a small place is his or her decision. As the species evolves and becomes more of a cultural mainstay, we imagine public opinion will evolve too. What do you think on this topic? Please share your thoughts in our comments section.