When the recession hit in 2008,  the restaurant Hari and Karl Berzins started went under. A year later, they were forced to sell their 3 bedroom, 1500 sq ft house. They were broke, raising a couple kids and forced to take whatever jobs their then Florida home had to offer.

Thinking of ways out of their predicament, they came across the book “Mortgage Free” by Rob Roy; the book promotes the idea of–you guessed it–being mortgage free by buying the best piece of land you can find, setting up a temporary dwelling, then building the home you want on your timetable–all in cash. They found plans from the Tiny House Blog for what their temporary abode would look like.

Karl set about building their 320 sq ft home (a figure that includes a sleeping loft). Like most tiny homes, it began on a trailer bed to avoid building regulations. He started the project in Florida, then moved it to a 3 acre plot of land in the woods of the Blue Ridge Mountains about a year ago. The total cost of the home itself was $12K, greatly offset by scavenged materials. 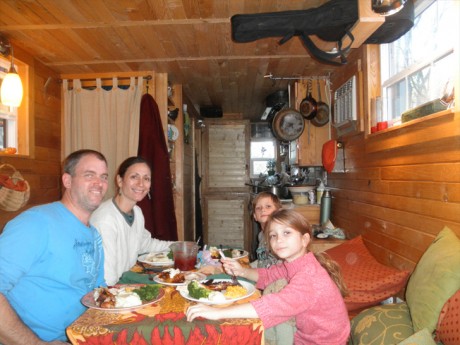 The couple has been chronicling their journey for the last year in their blog Tiny House Family. They report a higher quality of life. They are back in the black. Both Mama and Papa (their handles on the site) have taken work they love and supports their lives, versus work to pay the bills. The kids are even digging it too (according to the parents).

They have just finalized plans for their next house, a 16′ x 24′ model that will provide considerably more room and room to expand. I get the sense that the extra space is a welcome addition.

LifeEdited tends to focus on the urban side of small space living. City-dwellers usually have smaller physical footprints, use less energy, drive less, have more human interactions and so on.

But what about rural living? [We’ll leave suburbs/exurbs out of the equation for now] On the one hand, it tends to be more spread out geographically, requires more driving, more resources in general and has less unplanned social contact. On the other hand, it can be quite low impact; people like the Berzins grow much of their own produce and use very few resources we can see. Rural homes, while typically larger than a city’s, do not have to be, as evidenced by the Berzins (at least their initial home). Rural human interactions, while not as frequent as the city’s, can often be more intimate and meaningful. Perhaps most important is rural living tends to be free of frenetic urban energy, allowing its residents to lead simpler, calmer lives.

While there is not a city/country binary, it is interesting to see people trying to achieve the same ends–a calmer life, lower overhead, more quality interaction–through very different means. Leaving aside things like jobs, family ties and other considerations, does one environment support this lifestyle better than the other?

What do you think about urban versus rural edited living? Does living in remote locations oppose the less-is-more way of life? Or might the country mouse teach the city mouse a lot about living a simpler way of life? We’d love to hear your thoughts.