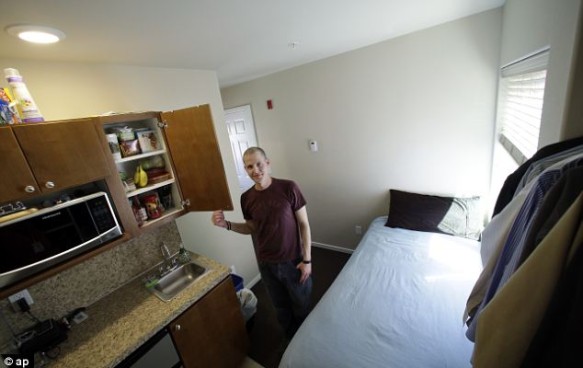 Should There Be Housing Size Minimums?

Last week, Seattle’s City Council was discussing micro-housing regulation–a discussion that’s been going on for a while. About a year ago, we looked at a proposal that sought to define a micro-apartment as a dwelling smaller than 285 sq ft; it had to have its own bathroom and a communal kitchen for every eight units along with a few other criteria. The discussion last week furthered this conversation, stating that eight micro-dwellings (effectively efficiency apartments), each with their own bathroom and kitchenette and one shared kitchen, would constitute one micro “unit”. There could be multiple units in a building.

One big unresolved issue for the council is dwelling size. One proposal promoted by Mike O’Brien, the city council’s land-use committee chairman, is that the average minimum size of all of the micro-housing units in a building be 220 sq ft; this number being in line with a number of other major cities like San Francisco’s minimum required area. Specifying that a buildings units’ average minimum–versus overall average–is a safeguard against developers putting one or two big units so they can build a bunch of tiny units.

The other proposal, came from council-member Nick Licata, who said “I don’t want to have the market determine the availability and affordability of units to the extent that we end up putting people in chicken coops.” He suggested an amendment to the 220 sq ft proposal, which would allow for units as small as 180 sq ft. The number was based on the fact that he knew people who live comfortably in apartments that size. It is also a number that is consistent with other parts of the city’s building code.

Whether Seattle lands on 220, 180 or 90 sq ft, there seems to be a bigger question on the table. Should cities even have minimum size requirements for dwellings?  If someone wants to live in a closet–and presumably pay a proportionately low rent–shouldn’t that be an option he or she should be able to exercise?

This is hardly a suggestion to abolish building regulation. Whether 8K or 80 sq ft, any dwelling should adhere to certain safety and livability standards. People shouldn’t live in chicken coops or cages. But if they want to live in a well-ventilated, sunny space with proper egress–one that happens to be the size of a chicken coop–who are government officials to say that they can’t?

On the other hand, Seattle is unique in that its government has been overall quite supportive of micro-housing. The current proposals being discussed are a function of that. The city is trying to add the micro-housing typology into its architectural canon through these regulations. And why not? Micro-housing provides market-based, affordable housing for the city’s growing single populations (40% of residents in 2011 according to the Seattle Times).

The city’s advocacy is no doubt helped along by the fact that developers seem to be making money building micro-housing. Hell, there’s even a lobbying group called Smart Growth Seattle. In many ways, the controversy is arising from the parity of the two sides: entrenched and vocal Seattleites opposing micro-housing (or at least trying to curb its rate of expansion) versus flush and connected developers, who are providing a popular type of housing.

This issue reminds us of Felice Cohen’s 90 sq ft apartment. Because of its size, Cohen was able to afford a neighborhood and lifestyle she couldn’t have had she lived a larger apartment. She proudly showed the tiny space off to Fair Companies. When the video went viral, her landlord got busted because it was an illegal sublet. She was evicted shortly thereafter. When we last saw her, she did an awkward tour of her new 500 sq ft digs, whose space she hardly knew what to do with. Cohen’s first apartment, so far as we could see, was small, but not dangerous. Assuming a space is safe, who’s to say that someplace is too small to live in?

What do you think? Should the government regulate housing size? Or, assuming housing is safe and livable, should the market and citizens decide? Let us know what you think in our comments section.