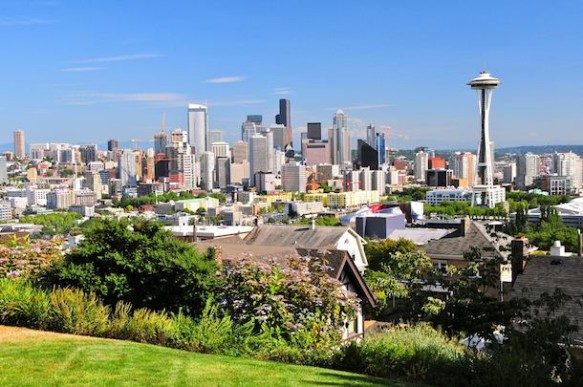 Forget NYC and San Francisco as the American leaders in smart urban growth. Seattle is where it’s at. The two former cities–with their tight geographies and urban grids conducive to walking, public transport and compact, efficient living–have always packed people in. But Seattle’s growth was more emblematic of many American cities, where, throughout the 20th Century, suburban sprawl reigned supreme. For 100 years, the suburbs of King County outpaced the growth of the city of Seattle (which, incidentally, is the King County seat). A trend that appears to be changing.

The first sign was in 2010, when the city of Seattle matched King County suburban growth. Then between 2011-2012 Seattle grew at a rate 25% faster than King County. 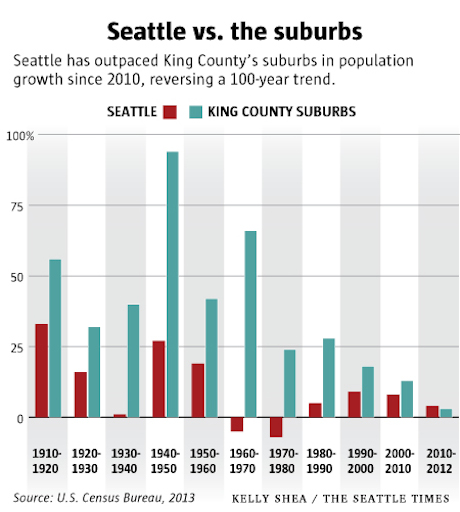 Some attribute this trend to the aftermath of the housing bust–young people couldn’t “graduate” to the burbs like their parents did in the past. But the trend is hardly limited to Seattle. From DC to Denver to Atlanta, people are choosing city living–a choice that may be more than sloppy seconds to the suburbs. 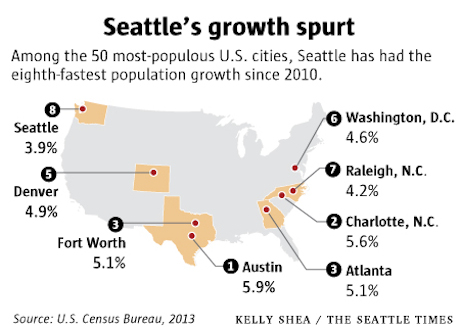 The Seattle Times speculates about the possible motivations behind this movement:

We might be witnessing a major demographic shift, with younger people rejecting a culture of sprawl and car-dependency associated with suburbs, and instead choosing the lifestyle offered by dense, walkable cities…Signs of Seattle’s success are not difficult to spot. Everywhere you look there seems to be a new apartment building under construction. As reported in The Seattle Times, more apartments were opened in 2013 than in any of the previous 20 years.

Seattle bears this out. Least we forget, the city is perhaps the epicenter of the micro-apartment movement (often to the chagrin of many Seattleites). These tiny apartment forgo large interiors and parking spaces for central locations and affordability. As of last year, there were at least 47 micro-apartment buildings throughout the city; these developments are unique in that they Seattle convert low-to-medium density neighborhoods into higher density ones.

Of course Seattle’s growth can’t be solely attributed to micro-housing. It does show Seattle’s regulatory willingness to centralize populations–something that can’t necessarily be said for NYC, for example, a city that still has a 400 sq ft minimum size for new apartments.

The city of Seattle has 7,402 people per square mile. Compared to NYC and San Francisco–27,550 and 17,620 people per sq mile respectively–that number is not earth shattering. But NYC and San Fran both enjoy significant geographical constraints as well as infrastructures that were developed well before the car came into widespread use. For them, dense, walkable, easily traversed cityscapes are natural. Seattle, whose infrastructure grew up to a greater extent around the car, was more susceptible decentralization, making recent developments all the more impressive. It shows that a city’s growth need not be dictated by nature–that how a city nurtures development plays a critical role in smart growth and more livable cities.