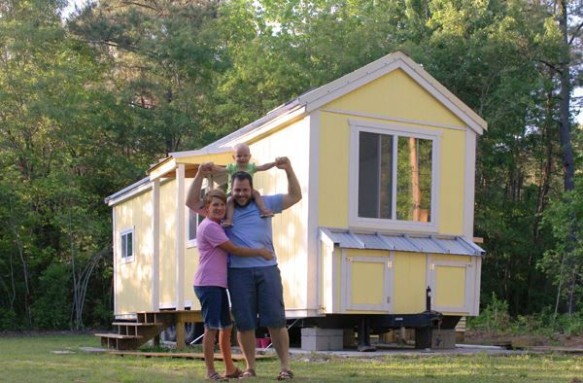 There are few critiques more oft heard about tiny house living than “you can’t do that with kids.” The logic goes that kids have lots of stuff. They need play spaces and room for their soccer balls and American Girl dolls. Most of all, parents need a reprieve from their kids–a virtual impossibility in most sub-350 sq ft spaces.

None of this is “true” however. Around the world, families–parents, kids, even a grandparent or two–share small spaces. We’re not referring to impoverished nations. Highly developed countries like England, Japan and Singapore have significantly smaller homes than the US, Canada and Australia (who have more or less the world’s portliest homes).

Even here in the US, people are challenging the notion that families cannot happily live in a tiny space. For (an extreme) example, Andrew and Crystal Odom share a sub 300 sq ft tiny house with their two year old daughter. In the above interview, Andrew suggests that the things most people object to about sharing small spaces with a family–no room for stuff or private space–are reasons why you should do it. He argues that in larger homes people can avoid one another and even themselves. Not so in the tiny house. You’re constantly confronted by others. Sometimes it’s really uncomfortable. Without a place to duck out, you’re forced to grow, deal and find your comfort anyway.

We appreciate Odom’s candor. He doesn’t sugarcoat the fact that there are definitely challenges in sharing such a small space. And we detect just a hint of longing in his voice for a bit of privacy. But he also seems earnest about his belief that the discomfor is making him a better person.

Of course just because it can be done doesn’t mean it should (especially when the two year old gets too big for her little bed). And there are other ways of dealing with your family and self than being crammed up against them. After all, Singapore boasts the world’s most unhappy people. Small space living induce self-actualization.

What do you think about Odom’s statements? Can the discomfort of sharing a small space be a catalyst for interpersonal and personal growth? Should we be moving toward rather than away from discomfort? Or are these the rationalizations of a dude who really likes not paying a mortgage?