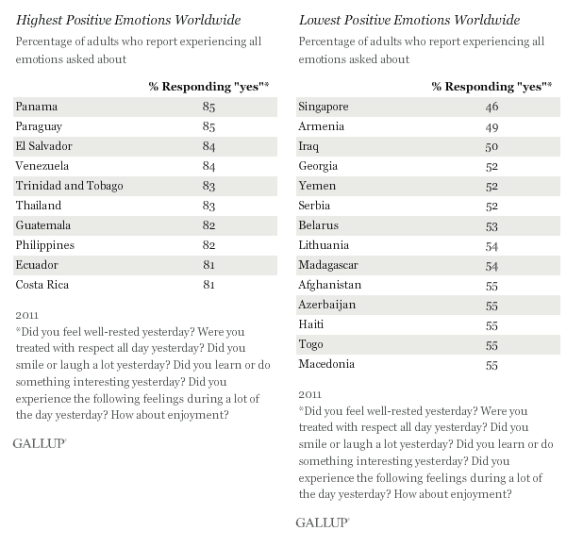 The Most Positive People On Earth…Probably Not Who You Think

You’d think that the most positive people on earth would live in nations where most people had enough money to provide for basic needs and a bit more, whose governments provide good social services, whose citizens enjoy long life expectancy and have access to good housing, education and the other staples of stable, developed nations. Well, you’d be wrong. In a Gallup Poll taken of 150K world citizens, some of the most positive people lived in places that are neither rich, nor stable.

In particular, seven Latin Americans nations were in the top ten of most positive people in the world. Some relatively poor nations like Panama, Venezuela and even Guatemala, a nation ravaged by civil war and gang violence, were in there. Also in the top ten was Thailand, who’s had their share of political unrest in the last decade.

On the other end of the spectrum was Singapore, who took the prize as having the world’s most negative people, beating out nations like Iraq, Afganistan and Haiti (all of whom scored fairly low as well).

Some suggest that the higher scoring nations are much more likely to display emotions in general. In other words, the lower ranking nations might not be as emotionally demonstrative, high or low. Others suggest that Latin American countries have a cultural aversion to expressing negative emotions.

Even with these cultural biases, there seems to be a sufficient number of happy, poor nations to call into question the association between wealth and happiness.

This is not to suggest a positive correlation between wealth and negativity. Several wealthy nations like Oman, Denmark and the Netherlands ranked quite high. Nor should it be an excuse to ignore improving conditions where they might be direly lacking. It does suggest, however, that our attitude on life might not be so dependent on our conditions. For example, Mali, a country whose per capita income is a mere $668, whose life expectancy is less than 50 years, ranked higher than the United States, whose per capita income is $48K and life expectancy is over 78 years.

Richard Low, a 33-year-old Singaporean businessman said this about his country:

We work like dogs and get paid peanuts. There’s hardly any time for holidays or just to relax in general because you’re always thinking ahead: when the next deadline or meeting is. There is hardly a fair sense of work-life balance here.

On the other side of the globe, Maria Solis, a street vendor in Paraguay (a country that tied Panama for most positive) said this about her life, happiness and money:

Life is short and there are no reasons to be sad because even if we were rich, there would still be problems. We have to laugh at ourselves.