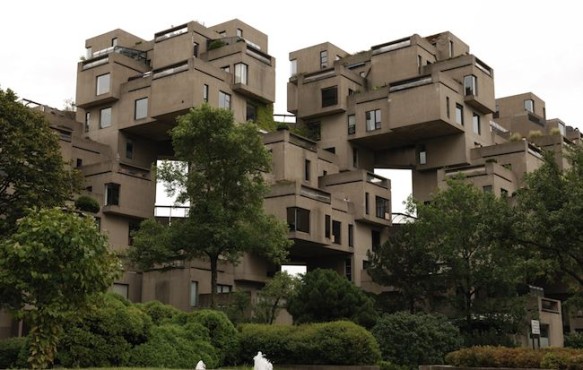 Habitat 67 and the Future of Edited Architecture

The idea of beautifully designed, high-density prefabricated compact housing is hardly new. Case in point is Habitat 67. The housing complex, built for the 1967 Expo 67 World’s Fair in Montreal, is a case study in great compact design.

Amazingly, the building was architecture student Moshe Safdie’s Master’s thesis (he did graduate and build many more important buildings). The building shares qualities with the Nakagin Capsule Tower and the Japanese Metabolism architectural movement. Like Nakagin, all of the 354 modules are prefabricated and identical. The 12 stories of modules are arranged and combined in different configurations to make 146 apartments varying in size from 225 to 1,000 sq ft (20 to 90 m). Unlike Nakagin, Habitat 67 has not fallen into disrepair and is an established, resident-owned coop.

While its lego-set look might strike some as contrived, the layout permits each unit to have its own terrace, skylights and direct sunlight (we think it looks pretty cool too). The building also features covered walkways, gardens and other open spaces.

With its prefab construction, high density layout, sunny and livable interiors, the 46 year old Habitat 67 might show that the past holds some best ideas for the future of architecture.