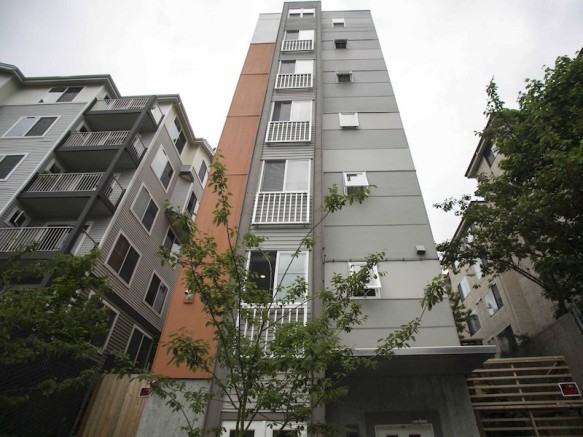 This site has long followed Seattle’s ongoing micro-apartment saga. Here’s a somewhat quick summary: for the last several years, Seattle developers had been fast and furiously building low to medium rise buildings filled to the gills with micro-apartments. These buildings were generally in desirable, transit-friendly neighborhoods–neighborhoods the micro-apartment residents would not have been able to afford if their apartments weren’t so darn small. Many of these neighborhoods were low-to-medium density and historically reserved for families and folks who make more than $15/hour.

The existing residents of these neighborhoods had a bunch of issues with these new micro-apartment buildings. They weren’t subject to neighborhood approval and many of the buildings didn’t jibe with existing architecture. There weren’t enough parking spots to support the residents (even though many/most micro-residents didn’t have cars). These buildings brought a more transient element to these family-friendly neighborhoods. And lastly, the very existence of the Seattle-style micro-apartment was the result of a loophole. You see, some of the micro-apartment buildings were designated as “congregate housing”–a designation normally used by college dorms. And presumably, college dorms didn’t belong in good neighborhoods. So last fall, the Department of Planning and Development decided to close this loophole, limiting congregate housing construction to “Neighborhood Commercial Zones”–dense mixed-use areas designated for heavy pedestrian traffic where buildings are generally allowed to be six stories or taller. In other words, the NIMBY crowd would get the densest micro-housing buildings out of their backyards.

While this might not sound like a big deal to the non-developer, this regulation change effectively killed congregate housing construction. Here’s the reason as stated by Seattle Weekly:

For financial reasons, investors are rarely willing to build below height limits [in the Neighborhood Commercial Zones]. Yet congregate apartment buildings make sense only if they are short enough not to need an elevator—up to four stories, says [architect David] Neiman. “If you build an elevator in, then every one of these rooms has to be fully [wheelchair-] accessible..by the time [we’re] done making them accessible…we can’t offer people smaller, cheaper housing because we have to make it twice as big.

Now it should be said that permits for SEDU’s (small efficiency dwelling units) doubled in this same period. But because SEDU’s underwent their own regulatory reform last year, having to adhere to larger size minimums (220 sq ft), they represent a pricier form of housing than congregate housing. Last year’s regulations probably killed the $600 all-inclusive rental with a decent location.

This assassination has not gone unnoticed. Seattle Mayor Ed Murray’s Housing Affordability and Livability Agenda (HALA) task force has proposed relaxing the zoning restrictions put into place just a year ago–a proposal that has not been welcomed by other governmental factions. Seattle Weekly reported, “Councilmember Mike O’Brien, who sponsored the ordinance that restricted microhousing, says he’s not interested in rehashing an acrimonious debate [about congregate housing] that concluded just last year.”

Neiman, an advocate of micro-housing, sees this as kowtowing to the affluent neighborhood base that protested micro-housing in the first place. O’Brien’s stance does not consider that micro-housing–while perhaps an imperfect solution that could have withstood a bit more regulation–was providing unsubsidized, clean, safe, functional and affordable housing in desirable locations for many people. This vacancy is a damn shame in this author’s opinion. While I don’t want to wax too libertarian on the topic, it seems to me that the people with the strongest objections to micro-housing in Seattle were always from the people not living in it. It seems to me that Seattle was an innovator is providing affordable housing to economically prosperous cities. Instead, the reform and subsequent lack of course correction augers more of the same: more people getting pushed to the margins, geographically, economically and politically. Perhaps the Council should have had a slightly more laissez faire approach to micro-housing regulation, letting developers create housing that works for the people living in them.