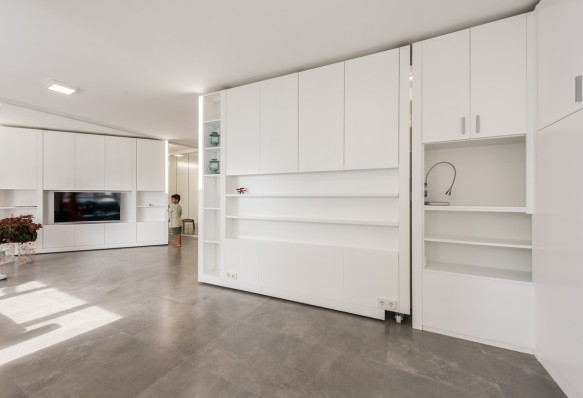 A Small Apartment for All Seasons and Whole Family

One of the most interesting and talented architecture firms specializing in small space design is Spain’s PKMN (aka pacman). We looked at their “ALL I OWN” apartment–a budget conscious transforming space whose moving walls shifted throughout the day with its owner’s needs–as well as “HOME BACK HOME”–a small space interior design concept that dealt with the trend of Millennials living at home a little longer than expected (if they ever left at all). Their latest project is entitled “MJE House”–part of a series of sorts called PEQUEÑAS GRANDES CASAS (Little BIG Houses). With the help of its large, pivoting walls that create various spatial divisions, the house might possess one of the most flexible formats we’ve ever featured on this site.

The space was designed for a couple whose primary residence is in Mexico, but also needed a home in Europe, where they spend a good portion of the year. PKMN’s objective was to create a space that accommodated the couple’s whole family including children and grandchildren. They wanted a home that moved around them and their lives rather than the other way around.

PKMN began the renovation with a modest, rectangular  65 sq meter (699 sq ft). Along the perimeter of the space are a number of builtin elements: a good sized galley kitchen, storage, an office that folds out of the cabinets, a table that stows away and more. But the stars of the space are the two, huge moving walls. Both pivot on an axis and roll along casters; both walls are connected to the house’e electric adding significant functionality. Depending on where the moving walls are placed, rooms can be made. One wall contains a wall bed on one side and the TV on the other; the other wall has a wall bed on one side and storage on the other. Along with another wall bed fixed to the wall adjoining the kitchen, the house sleeps five (very friendly) people. There are also doors that can completely seal off both of the bed areas (“room” is a loose term in this space).

The bathroom, kitchen and a couple nook spaces along the windows are the only areas that can be considered fixed–everything else moves and can be used in multiple ways, allowing the apartment to function like a space twice its size.