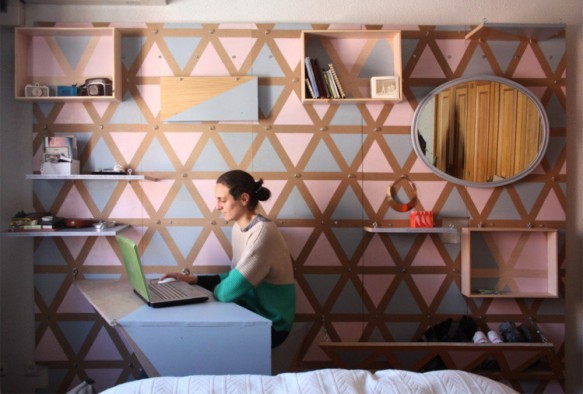 Back in the day, at least in many industrialized nations, there was an expectation that children graduate from school, leave home to go to school or get a job. After that, maybe they’d live and work in the city for a while before finding a nice guy/gal to settle down with and have their 2.7 kids. Rinse, repeat. In the last decade or two, these expectations have been pretty much upended. Ever-weakening job markets coupled with high housing costs around the globe have led many Gen-Y’s and Millennials to never leave their folk’s home or return there at regular intervals due to limited economic resources and opportunity (the latter often referred to as the “boomerang generation”). Spain, like many countries, has nearly half of its young adults (18-29 year olds) living with their folks. Putting aside the sociological implications of this situation, there is a definite design challenge here: many of these people are occupying childhood rooms designed for childhood or adolescent needs. Spain’s PKMN [pacman] Architecture (the firm behind the All I Own House) in collaboration with the Tricontinental Master Degree program thought they’d to try and tackle this latter challenge with HOME BACK HOME. They are reinventing the “kid’s” room in a way that reflects the specific needs of their occupants’ advanced station in life as well as the general change in household demographics.

The old model viewed leaving the proverbial nest as an emancipatory act. But that emancipation is currently difficult or impossible for many young people. HOME BACK HOME turns the current model on its head. It is a study in how to design spaces for what they dub “de-emancipation”–a rite of (re)passage of children moving back home. Rather than being a burden, PKMN wanted to present this passage as an opportunity to create new supportive, intergenerational housing.

In creating this new model, PKMN used two returning-home women–Dune and Edal, a fashion designer and artist respectively–to demonstrate their concept. They gave both of the women’s childhood rooms programmatic makeovers to better suit the women’s current needs, be those professional, practical (e.g. storage) or aesthetic. Modular, flexible, low-cost furniture components were added to both rooms to suit each woman’s needs.

Beyond the designs themselves, what’s most interesting about the project is the idea of transforming a situation that is often considered unfortunate into an opportunity and even something that could be a positive addition to the architectural cannon.

The project also begs the question: what if architects and designers started making spaces that reflect current demographic realities? Might there be more spaces for singles, for adult children who cannot afford to move out of their parent’s home, for divorced parents with partial custody rights, for how people live today?