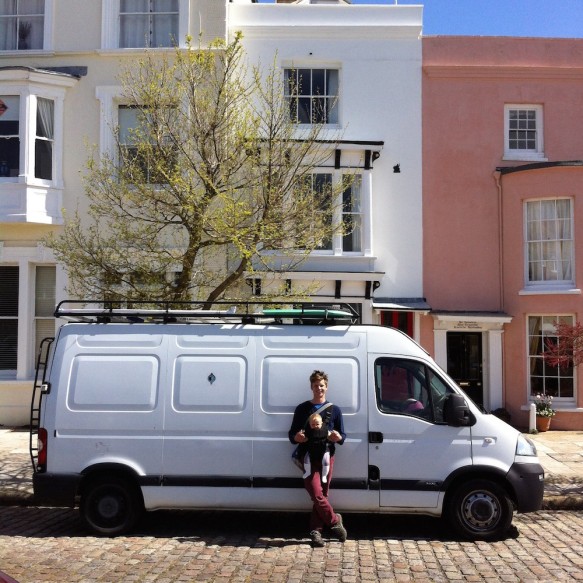 Life is Either a Great Adventure or…You Know

When’s the last time you had a good adventure? Seen new places, met new people, encountered new situations? For some, it might be a recent occurrence, but the rest of us are clearing out the cobwebs of our minds to recall an answer. Now imagine a life where adventure was a given–where your life was a succession of new experiences, new people, all punctuated by rewarding work. This latter life is the one William Thomson and his family appear to be living. This last March, the family of three put their lives in a camper van to tour the British coastline, running a business that makes special tidal flow charts for coastlines around the world.

The journey actually began with the charts, which were inspired by the misunderstandings that his parents and many others have about how tides work. Thomson told me, “My parents were paranoid the tide would drag us out to sea. My training with the RNLI [Royal National Lifeboat Institution, where he had previously volunteered] taught me this is not true: instead the tide will take you along the coast.” He wanted to create an alternative to the complicated nautical charts and tidal stream atlases that were the main educational resources available. 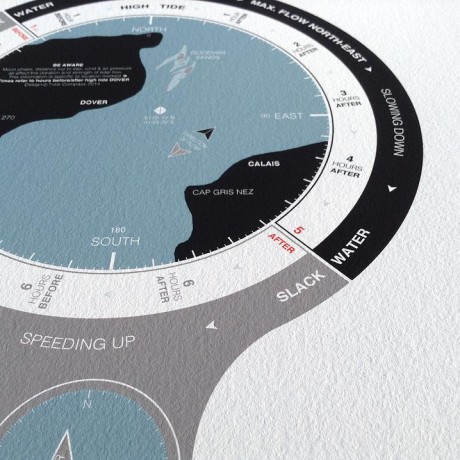 An architectural graduate, Thomson set about using his skills in design and the presentation of information to create simple images that convey tidal data, providing sea safety knowledge for swimmers, sailors, kayakers, paddle boarders, wind and kite surfers and scuba-divers.

Thomson had already made about 75 charts for various British locales when the idea occurred to him that he could visits the locations, selling the charts along the way. The remainder of the business he could run off his laptop and a wifi hotspot. The family sold their 1986 Land Rover Defender 90 and picked up a 2006 Vauxhall Movano van, spending a couple months converting its six meter interior into a livable space for his girlfriend, their six month old daughter and their water spaniel Alfie. 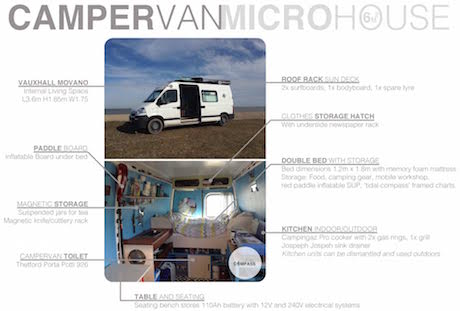 Thomson reports that life is not all fun and games–though it is largely fun and games. In one blog post, Thomson goes through a typical day, which involves around three hours of work in the morning. After work, there’s about six hours of hanging out outside–fishing, surfing, paddleboarding and the like–followed by another three hours of family time. Thomson also has a night shift after the baby is asleep.

Life does present some challenges, though none bigger than more conventional living situations. Until a recent addition of a water meter, they kept running out of water. Following the meter, they were better able to track and conserve, allowing the four of them to live on a scant 10 liters of water a day (the average American uses around 300-380 liters/day). They refill their 70 liter tank at their once-a-week paid campground visits. 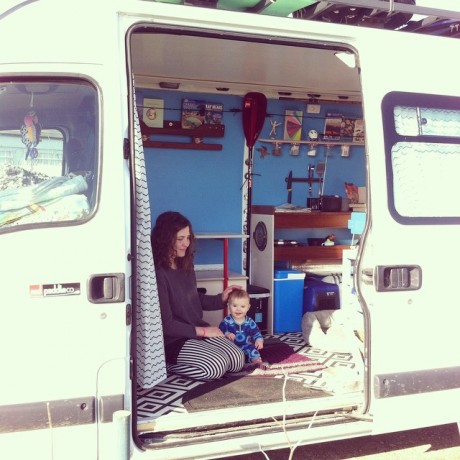 William also told me their particular situation has a number of logistical considerations: “Finding somewhere to park where I have wifi to work, where we can wild camp without annoying someone, somewhere we can walk the dog, get into town to visit the galleries, and then find time to have some fun (surfing, swimming, paddle boarding). It does feel like a juggling act.” But overall he says he loves living simply in their camping style and consuming very few resources.

Thomson told us that they plan to keep on going until their daughter reaches school age, which isn’t for another four years. They have plans to chart the coasts Scandinavia, the US, Canada, New Zealand and Australia, and hope to visit/live in some of these places before settling down (at least for the school year. He sees summers spent on the road).

And if you’re wondering, like I was, what they’ll do when the weather turns cold, Thomson said they plan to head to Portugal, where the winters are mild.

Thomson said there are many benefits to their situations, “We’re outdoors all the time, we’re not wasting money on rent, our micro house is light, airy, with everything we need and nothing we don’t, the view from my design studio is always awesome and always changing, we’re visiting new places every day which is very exciting and the business is thriving!”

Check out more at Tidalcompass.com