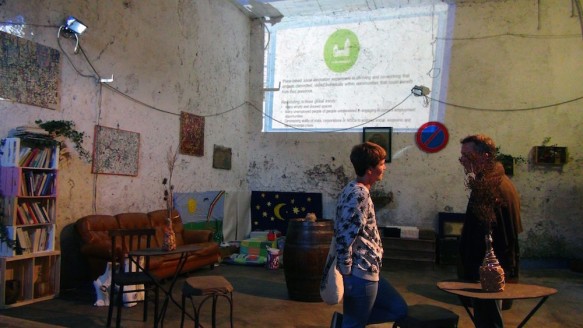 What Would You Do If Money Weren’t An Issue?

The above question is one few of us feel the space to contemplate. Mortgage and rent, car payments, groceries, electric, gas, cell phone, internet, etc–the collective pool that we sum up as “bills” tends to keep us in a loop of work, pay, work, pay…pay funeral bill. Most people’s biggest bill is housing. One rule of thumb says that housing is about 30% of our income–a number that is higher for many. The number two expense is transportation, which is usually inextricable with housing. So it could be argued that if 40-60% of our living expenses were somehow magically paid for, we might be less inclined to take jobs that “pay the bills.” We might start doing things we love or that help people or that bring us satisfaction or all of the above. This housing-is-no-object equation is one of the main ideas behind unMonastery.

UnMonastery, as the name suggests, harkens back to monastic traditions–the monastery acting as a refuge to support a monk’s life of contemplation and service. UnMonastery has a technological and secular twist however. According to their site, they want to “recreate the best social functions of the traditional monastery: by giving the participants a collective purpose, a chance to develop deep relationships with one another and a reduced need to generate personal income so time can be dedicated entirely to serving the local community and contributing to global efforts in creating new digital tools.” UnMonastery finds as much inspiration from hackerspaces and coworking spaces as they do monasteries. The main point is that residents can eliminate or reduce living expenses as to live a life devoted to serving their community and the world, mostly, though not exclusively through digital tools.

Though the unMonastery idea is not location dependent per se, they would like to build a network of communities around the world that “work together…autonomously…[and] prototype new solutions to common problems.” An initial unMonastery house was established early last year in the ancient southern Italian town of Matera (above pic is from their space); the unMonasterians set about addressing a number of local and global challenges. For reasons not entirely clear, that location was shut down. Currently, a new unMonastery is forming in Athens, a city whose citizens unMonastery claims “have a strong affinity to hacking of all sorts; be it with internet connectivity, food sharing, reactivating abandoned spaces, or just simply taking the metro.”

The modern world does not necessarily reward lives governed by purpose–unless that purpose is making money. As unMonastery posts on their website:

When it comes to work it is increasingly difficult to reconcile making money with making sense. People do work to make a living. Others do work to make meaning. But the two works are not the same work.

While unMonastery is a little too new (and unstable) to be recognized as a sign of things to come, it does point to one way things could be: a world where people are not working to live, a world where service to the greater good is valued above all else.