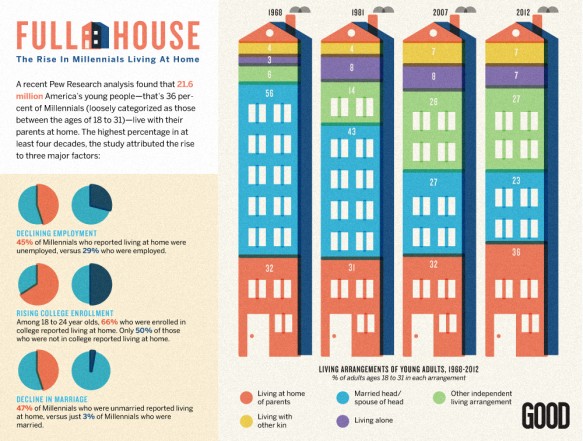 Why Are Millennials Living at Home?

Maybe it’s access to stocked fridges or the premium cable channels–whatever the reason, Millennials (roughly those born between 1983-1996) are shacking up with their folks at unprecedented rates. The above infographic from Good Magazine shows that in the US there were 21.6 million people–7% of overall population and 36% of Millennials—living with their folks in 2012; a 4% increase over just five years prior. The US is not alone. According to StatCan, 59.3% of 20-29 year old Canadians were living with their folks or one folk in 2011. Compare that to 11% in 1981!

Truth is Millennials aren’t staying at home because they’re watching Game of Thrones with tubs of Neapolitan ice cream. The reasons are economics and lifestyle choices. The days of graduating college into a verdant field of employment opportunity are, at least for the time being, over. 2/3 of all American graduates are leaving college with an average of $26K student loan debt. Then there’s low employment rates, which for Millennials stands around 15%–twice the national average. Of the live-at-home American Millennials, 45% reported being unemployed. The other 55% are not necessarily flush; real wages have consistently fallen for Millennials–a problem most acute with their cohort.

Then fewer Millennials are marrying. Only 20% of 18-29 years olds are married; compared to 59% in 1960 for that same group. Tellingly, 44% of Millennials think the institution obsolete according to Pew Research. Moving out to live with your partner just doesn’t have the urgency it might have once had.

What does this have to do with small space living?

We have read many comment boards for stories about micro-apartments, with the frequent comparisons to jail cells and cages. But what often gets missed amidst the fast-flying vitriol are demographic realities and changing lifestyles. Many people–and not just Millennials–don’t want to spend all their money on housing, either by choice or economic necessity; they might not want to marry; and their ideal living situation is more likely to be in the city than suburbs, particularly for Millennials.

There has been a big kerfuffle about micro-housing in the Pacific Northwest, but there has been less talk about why they’re so popular. There’s a huge demand for low-cost, centrally located housing, and having a rumpus room big enough for a ping-pong table is far less important than proximity to work and other amenities. While we can’t prove it, we suspect many of the micro-apartment dwellers are people who might otherwise be living at home. Moreover, as Derek Thompson of The Atlantic stated (perhaps a little optimistically), we are living in an era of cheap food and consumer goods relative to income.  Now it’s the time for housing prices to follow suit.

Of course there are many other factors contributing to the Millennial “failure to launch,” as many have put it. A stagnant economy, questionable returns on higher education, income inequality, a shrinking middle class and so forth. But in a certain way, reducing one of the biggest life expenses–housing and, to some extent, transportation–you can give more mobility for people who may never enjoy the salad days their folks did. And no, many Millennials might not be able afford a 1500 sq ft home for themselves (too often the only choice), which forces them to stay at home. But even with a modest income, they might be able to afford a great 350 sq ft apartment in the middle of the city, one that allows them to live car free and gives them access to the things that they find important.