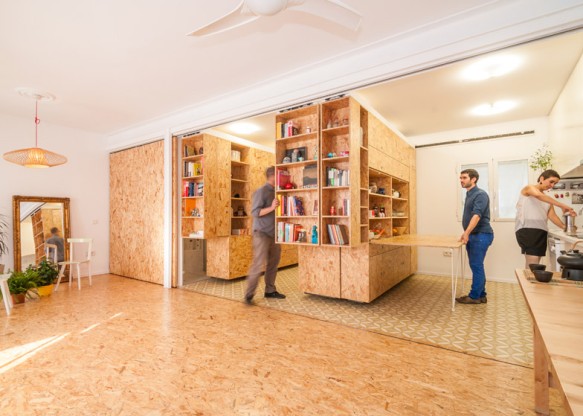 Decompress (and Compress) at this Small Spanish Apartment

Moveable walls are a familiar and useful tool in maximizing the function of a small space. We incorporated it into the LifeEdited Apartment, Gary Cheng did it, Clei Furniture used it in their Elastic Living concept, it was there in the Environmental Grantmakers Association office, and the Barcode room by studio_01 had a nice rough-hewn take on the idea. Now we see it again with Spanish architects PKMN’s “All I Own” apartment.

The architects have a number of things to say about the 540 sf apartment about the relationship of interior space to stuff–how her stuff, contained in the three ‘floating’ chipboard volumes move with her throughout the day. Rather than commenting on that, we’ll let you check it out on PKMN’s website.

What interests us most is execution and costs. Though there’s no mention of it on their site, we suspect budget was a big factor in designing and building this space. They used ample chipboard on both the moving walls and floor of the non-transforming space. Chipboard, achieves a cool look at a small price. We do have some questions about its weight and durability, particularly in pieces that are moving so often.

And rather than using an expensive, built-in steel carriage for the walls to slide on, they use two wall-mounted tracks on each end of the walls coupled with casters that slide on the tile floor. We suspect the tracks act mainly as guides, while the casters take the brunt of the walls’ considerable heft.

We appreciate the flexibility of the space, particularly the ability to stash away the kitchen and bedroom. The ample storage allows the space to keep its clean and clutter free appearance. And it’s pretty impressive how compressed the bathroom is, though we wonder why you would ever close off access by putting a wall in front of it.