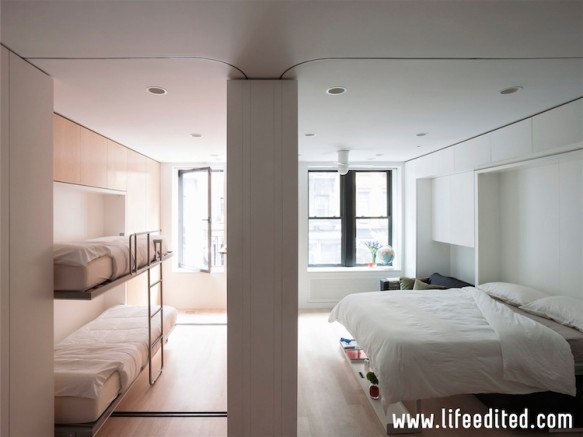 One of the most asked about features of the LifeEdited Apartment is its moving wall. More than any other feature in the apartment, the moving wall provides a new way of thinking about how small spaces can be used and divided. With it, we are able to transform a studio into a two bedroom apartment–all without adding virtually any additional volume to the overall space.

The wall carriage and track were custom made by Modern Office Systems, whose main business is making large file storage systems for places like libraries and law offices. They supplied two steel tracks and a welded-steel carriage. The carriage houses wheels that fit into the track.

The recessed tracks create two 3″ wide grooves in the floor, which can be perilous for high heels (fortunately, the apartment is a shoe free environment). The sliding action of the wall is incredibly light.

The cabinet that sits on top of the carriage was jointly made by American Custom Made Cabinetry and Rama Woodshop (both NYC-borough based) out of FSC maple plywood and finished with low VOC paint. The frontside (facing couch) has three large cabinets, a nook for the computer monitor, one large cabinet above the nook and four lockable drawers under. The top drawer is also a retractable standing desk.

The two most notable items stored on the frontside are the IQ Air Hepa Air Filter, which has a perforated door to permit intake and outtake of air, and the projection screen, which has its own retractable drawer at the top of the wall. A Mac Mini computer inside one of the cabinets drives the monitor. A “third rail” power delivery system couldn’t be figured out, so power comes from an extension cord that runs out of the base of the wall. The cord is on a self-retracting spule and is plugged into one of two floor outlets (one for when the wall is closed and the other when it’s open).

The backside (facing bunk beds) is surfaced with a wood veneer and features another standing desk, two small drawers and a long cabinet near the wall for guests to use.

Incredibly, our architects Guerin Glass and their builders were able to make the top of the moving wall sit within an inch of the ceiling, making the unit seem like a real wall and providing a high degree of light isolation. When the wall is open and the curtains are closed, light does not travel from one space to another.

The track and carriage cost around $4800. Due to the complexity of its design, the custom cabinet, as well as leveling and reinforcing the floor added an additional $18K.

There are definitely ways making the design less expensive. For example, both using casters instead of the tracks, and making a less complex cabinet would make the wall simpler and cheaper. Expenses you probably shouldn’t avoid are making the floor level and having tight tolerances since both of these things make the wall seem like an integral part of the space. Nevertheless, spending $23K for a feature that adds a ton of storage, a desk, a projection screen and an additional bedroom–in a city where a 100 sq ft space can easily fetch $100K–might make a lot of sense for many.