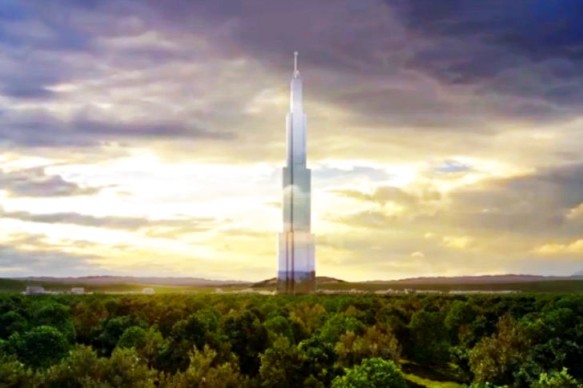 If you’re a high-density housing fanatic, the best direction to build is up. The logic follows that if you build up, you fit more people into less land area, resulting is less commuting, greater efficiency for things like power delivery and distribution of goods and more land for nature. In an act that could be construed as high-density fanaticism, a company called Broad Sustainable Construction is building a tower over a half-mile high; its residents will use 1/100 the land area of their terrestrially-based friends.

Broad’s aptly named Sky City is no pipe dream–ground is set to break this month in Changsha, Hunan in south-central China. At 838 m (2,749 ft) high, it will become the world’s tallest building. Its 220 stories will be reached via 104 high speed elevators. There will also be a six mile ramp going from the first to 170th floor. Its 11M sq ft of floorspace will house 17,400 residents, a 1K person capacity hotel, schools, offices and shops–in other words, there’s little reason to leave the building outside of the strolling the ample parklands surrounding the building. But wait, there’s more! Broad, who specializes in prefabricated construction, plans to erect the whole thing in a scant 210 days. If you doubt their claim, check out this video showing Broad erecting a 30 story building in a mere 15 days.

And if you doubt their claim–about the feasibility of the project, the timeline, etc.–you aren’t alone. Some say it will not withstand wind forces. Others say that Broad hasn’t built anything over 30 stories (true) and adding another 190 for its next project is a bit of a reach. Others think it’s just a marketing ploy.

The company has fired back saying they are quite serious and that the building has passed the needed safety tests. They even say it can withstand an earthquake of a 9.0 magnitude and three hours of active fire.

Engineering squabbles aside, it’s hard to fault Broad for a lack of earnestness. From what we can tell, they are on a mission to save the planet. Their buildings, which include serious efficiency measures like triple-glazed windows, 8″ insulation and Heat Recovery Ventilators, are said to be five times more energy efficient than traditional buildings (not even factoring in the benefits of density). The company promotes more than efficient construction–they also promote a way of life…one that sounds suspiciously like LifeEdited’s. They recommend such things as having one child to make “Mother Nature happy”, “not to buy anything that is unnecessary in the family” because “Simple life is very relaxing,” and they claim that “reading and listening to music during holidays are more leisure [sic] than taking a trip by air” (see more of their philosophy here).

Sky City is nothing if not audacious. And while we have suggested that there might be a Goldilocksian density–neither too dense, nor too spread out–there’s something appealing about imagining a vertically-housed world surrounded by ample green space to recreate. In this world, people live close to one another and use only what they need. What could be simpler and more edited than one structure that houses your whole life?

Of course, there’s the dystopian angle as well. Might Broad be ushering in an age where the planet is littered with half-mile-high buildings, leading to greater population explosions, ever-dwindling green-spaces and lives lived out in the confines of a high-rise tower?

Whether Sky City will presage either of these scenarios remains to be seen. Either way, at Broad’s projected breakneck building schedule, the future won’t be long now.