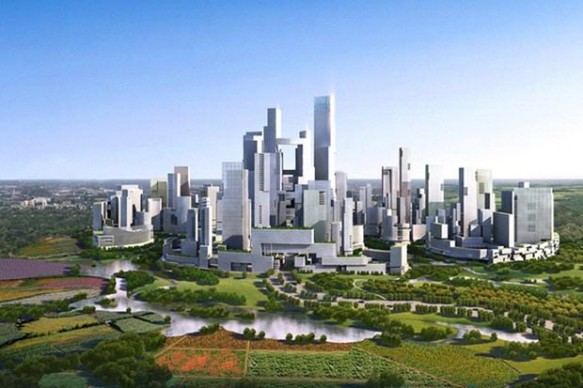 What makes a perfect city? Walkability? Culture? Great restaurants? Density? Architecture? Diversity? If you could make a city from scratch, how would you design it?

Throughout history–from St Petersburg to Brasilia to many, many more–urban planners, architects and despots have attempted to turn clear tracts of land into exemplars of urban ideals…with mixed results. One of the latest editions of this city-making craze is the Tianfu Ecological City going up outside Chengdu, China.

Chicago-based architectural firm Adrian Smith + Gordon Gill is trying to create a prototype city that is meant to solve many of the present social and environmental pressures that have resulted from China’s explosive population and economic growth. If the prototype is a success, they can plant these cities across the country. Smith and Gill say this about the city:

When completed in about eight years, Tianfu Ecological City will be home to about 30,000 families totaling 80,000 people [within 1.3 sq km, making it one of the densest cities on earth], many of whom will also have opportunities to work within the development. The distance from any location in the city to any other location will be walkable within about 15 minutes, all but eliminating the need for most automobiles. The city will also be connected to Chengdu and surrounding areas via mass transit to be accessed at a regional transit hub at the Tianfu Ecological City center.

And this about the environmental benefits of their ultra-dense plan:

Tianfu Ecological City will use 48% less energy and 58% less water than a conventional development of similar population. It will also produce 89% less landfill waste and generate 60% less carbon dioxide.

This algorithm comes as no surprise from from a firm that designed the “Kingdom Tower,” which at 1km high is 567 ft higher than the current highest building. But do algorithms make good cities?

A few weeks ago we looked at some not-so-great conditions in Hong Kong–the 2nd densest city in the world, whose skyline is littered with high-rises. In the piece we quoted Treehugger.com’s Lloyd Alter as saying:

I am convinced that they are wrong, that there is a “goldilocks density” that is high enough to support a vibrant, walkable community, but not so high that you can’t walk up to your apartment when the power goes out, that needs expensive infrastructure like subways and huge underground parking garages. Dense enough to build a sense of community, but not so dense as to have everyone slip into anonymity.

Unlike Tianfu, other cities-from-scratch are going for the Goldilocks formula–not too high or dense. IKEA’s Strand East in east London (below) opts for meandering streets and medium sized buildings. Las Vegas’ Downtown Project is trying to transform the old Las Vegas strip into one of the world’s greatest innovation hubs, using 100 per people acre as the sweet spot for density. 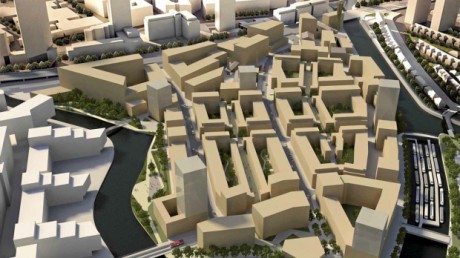 But comparing London and Las Vegas to Chengdu is not a fair. Though the former cities have their challenges (insane costs, dwindling water supplies), they pale in comparison to the latter’s (crazy population, industrial pollution).

So the question is: are the roads of utopian cities paved with good intentions? For example, many consider Brasilia’s idyllic center to be a model of Modernist misdirection, and its cohesive design is now surrounded by ring of improvised shanty towns (none designed by Oscar Niemeyer). Or Ordos, China, a utopian city that now sits completely uninhabited.

But there are also successes in master planning: Haussman’s Paris, L’Enfant’s Washington DC.

What do you think of Tianfu in particular, and cities-from-scratch in general? Is it a recipe for a successful city or another great idea whose time will never come?