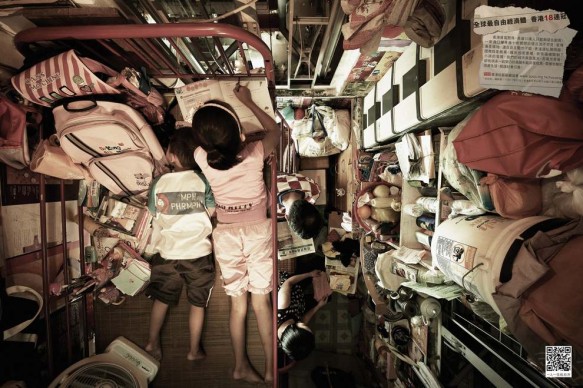 We’re big proponents of high-density urban living but there comes a point where small-footprint, efficient housing starts looking a whole lot like storage units for humans. Few places fit that bill like Hong Kong, which boasts the second highest density of any sub 1M person nation in the world.

Some pictures by photographer Benny Lam taken for the Society for Community Organization show the more unseemly side Hong Kong’s high density. The shots are part of a campaign meant to bring awareness to the shockingly cramped conditions many Hong Kong residents live in.

The shots bring to mind a series of photos from photographer Michael Wolf, who looked at many different facets of Hong Kong density–from squeezed interiors to seemingly unending high-rising apartment exteriors. Check out his website to see the full series.

We recently read an NRDC interview with our good friend and Treehugger managing editor Lloyd Alter, where he shared some of his thoughts on the limits of density. While there has been a recent battle-cry of “denser-is-better” that axiom can be a bit facile, as he explains:

Environmental writers and thinkers are piling on, all of them claiming that we need to fill our cities with 40 story buildings. A renowned architect can design a building that is essentially a pile of radiator fins but call it green because it packs 750 apartments on a third of an acre, saying that the most important thing we can do for the environment is live in compact cities with mass transit.

I am convinced that they are wrong, that there is a “goldilocks density” that is high enough to support a vibrant, walkable community, but not so high that you can’t walk up to your apartment when the power goes out, that needs expensive infrastructure like subways and huge underground parking garages. Dense enough to build a sense of community, but not so dense as to have everyone slip into anonymity.

We’re not intimate enough with Hong Kong to say whether their density is problematic (though a video we posted a while back seems to indicate that people in Hong Kong seem to think it’s a problem), but we can’t help think that these Hong Kong homes bear out Alter’s contention that greater density ain’t always so great.

Incidentally, Singapore is the both the densest and unhappiest nation in the world. While that’s far from proof that hyper-dense living causes unhappiness, anecdotally it might bolster the contention that maximizing density doesn’t maximize greater living.