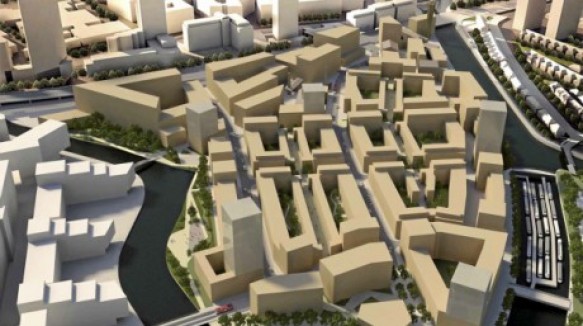 After yesterday’s post on IKEA homes, we learned that single, prefab homes and small developments were not quite enough for the furniture giant: IKEA has entered the business of city-making.

LandProp, IKEA’s property development arm, is developing a city called Strand East outside of London. According to Fast Company Co.Exist, the development:

Will feature 1,200 homes, 480,000 square feet of commercial office space, a ‘hub area’ with shared space for the community, a creative zone intended for creative-minded businesses to take root, a restaurant, a hotel, pedestrian walkways, cycle routes.

Other features include winding, car-free streets, similar to old European cities (and IKEA stores), and underground parking that will provide ample pedestrian space and safety. There will be a strong focus placed on culture, community, food and other quality-of-life boosters. Click on infographic below for other community features. 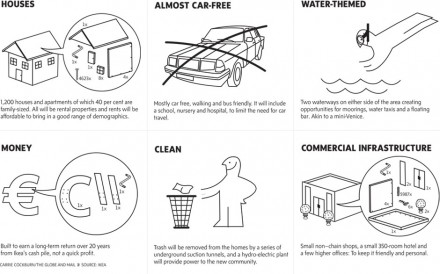 Like its furniture, IKEAville, um, Strand East, is focused on middle class affordability and lifestyle. 40% of homes will be family-friendly.

Project Manager Andrew Cobden told The Globe and Mail this:

We would have a fairly firm line on undesirable activity, whatever that may be. But we also feel we can say, okay, because we’ve kept control of the management of the commercial facilities, we have a fairly strong hand in what is said in terms of the activities that are held on site.

Similar to yesterday’s conversation about IKEA homes, where owners might trade personal touches for affordability, function and simplicity, residents of Strand East might trade ownership for a great living experience largely governed by LandProp.

The idea of housing-as-service runs counter to the American Dream, which is inseparable with home ownership, even when home ownership, on balance, is more headache than opportunity.

Strand East also presents the idea of privatized urban planning. IKEA is creating an ideal urban structure where government might not have the audacity or resources to do so.  But given that it’s a business, might their instinct to make money trump their civic responsibility?

We’ll have to wait and see. While the land has been purchased, the company is still getting their permits in order. LandProp is hoping to begin construction in 2013.

Via The Globe and Mail and Fast Company Co.Exist