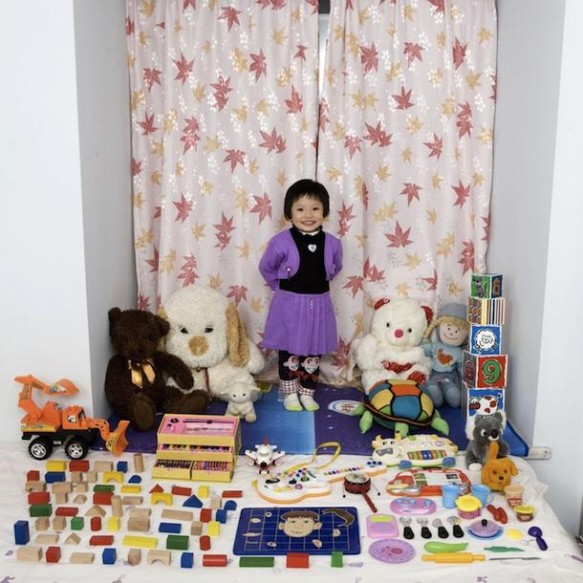 Over the course of 18 months, photographer Gabriele Galimberti traveled the world taking shots of children and their most valued toys, producing a series she calls “Toy Stories.”

What is visible in the series is very interesting. As most might surmise, the children from poorer countries are not only displaying their favorite toys, but their only toys, some of which, like Maudy from Zambia, aren’t even toys. On the other hand, children from richer nations often display acres of toys.

What’s not visible is equally–if not more–interesting. Galimberti said this about how the kids treated their toys:

The richest children were more possessive. At the beginning, they wouldn’t want me to touch their toys [she played with the children before shooting], and I would need more time before they would let me play with them. In poor countries, it was much easier. Even if they only had two or three toys, they didn’t really care. In Africa, the kids would mostly play with their friends outside.

A perfect example of this is Botlhe from Botswana, who displays her lone stuffed monkey–a display that seemed more obligatory than a sign of affection. Galimberti writes:

[She] has a lot of friends, and all of them live really close by to the small house where she lives with her family in a residential complex. In the complex, there is one toilet for every four families. Botlhe has only one toy, the monkey, but she almost never plays with it because she prefers to go out with friends and play with them.

Toy Stories reminds us of a study that reported who the most positive people on earth are (hint: it wasn’t the richest people with the most stuff). None of this should be construed as idealizing poverty, but these children might make us further question the relationship between the accumulation of stuff and happiness. Like Galimberti said of the children: “They just want to play”–and toys, we might guess, were not essential to achieve that end. We suspect adults aren’t much different.