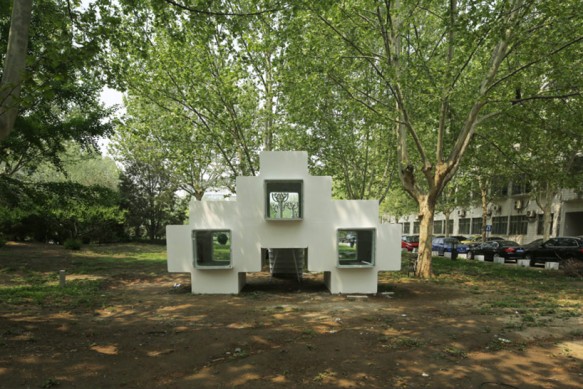 Okay, maybe “t” is the more accurate letter, but any way you look at it, these tiny housing modules show an interesting, prefabricated, highly-scaleable housing solution. We use the term “solution” as their current incarnation might be a tough places to call “home.”

The project, simply dubbed “Micro House,” was designed by Beijing’s Studio Liu Lubin as part of the “Get it Louder” exhibition–the same place where the Tricycle House was featured. Like the latter three-wheeled home, Micro House is one part design study and another part political statement–a reaction to China’s questionable land-grabs and soaring real estate values.

The exhibition model was a three module cluster: one module for living/working, one for sleeping and one for bathing (we’re thinking the cooking module, shown in prototype drawings, might have been nixed as it messed up the symmetry). The module’s t shape enables enough room for an occupant to stand up–though we imagine entertaining might be a bear.

The micro house can be set up individually as it was for the exhibition or, more interesting to us, stacked upon one another to make large housing pyramids. Like any tiny house, the more the merrier, and the interlocking structure seems to lend itself for structurally sound stacking.

There are some (okay, maybe many) drawbacks to Micro House design such as having to go outside to move from one module to another. We’re not sure why they didn’t combine living and sleeping quarters as the latter tends to occupy an inordinate amount of space compared to its usage. The overall module size seems pretty darn small to us, though that might have more to do with the Get It Louder intent, which was to make homes that transport easily. We could imagine a larger version being actually quite livable.

All that said, it’s a concept home and an interesting one at that–one that bucks convention and whose very DNA bespeaks inter-connectedness and efficiency.

Via Rocket News and designboom