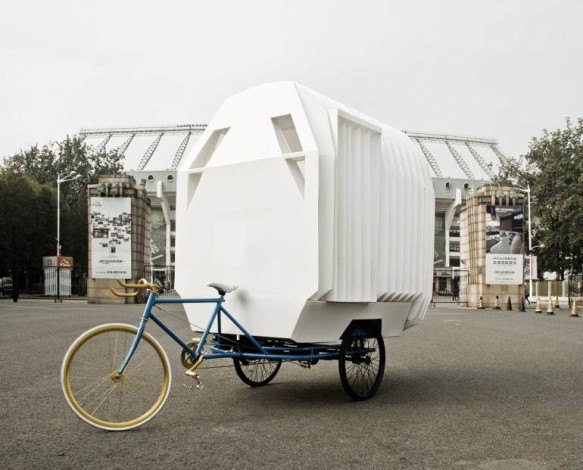 Sure, tiny houses are tiny, but they seem downright palatial compared to the Tricycle House. The project, part of the Get it Louder Exhibition in Beijing, is collaboration between People’s Architecture Office (PAO) and the People’s Industrial Design Office (PIDO). Like Tiny Houses, the house is as much a political statement as it is an architectural one, providing a response to the soaring price of Chinese real estate and government “land grabs” that have displaced many Chinese citizens. The tricycle provides the opportunity for home ownership, albeit on very small scale.

The polypropylene-constructed house is roughly 30-35 square feet and can be used as a dining room, kitchen, bedroom, workspace and bathroom. It boasts some impressive features such as a bathtub and clever folding sink and drawers. Similar to the Napoleon Complex, the house seems best used when coupled with other tricycle houses and tricycle gardens.

We’re not sure if there are any plans to develop the idea beyond concept, but a similar lightweight, off-grid housing structure would make a great edited recreational vehicle.

Via Gizmag and Treehugger