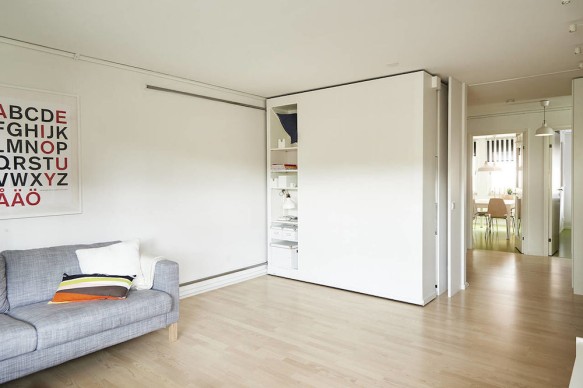 The moving wall in the LifeEdited apartment was one of its most innovative and useful features. Not only did it house an office, a projection screen and a bunch of storage, but moving it out divided the studio space into a three room apartment. A lot went into its design. The carriage and track were custom made by Modern Office Systems–a company whose stock and trade are library walls and corporate file storage. The track had to be attached to the floor joists and the rails were built into the floor. The cabinetry on top of the carriage was all custom made as well. All of this put the cost somewhere around $23K, which doesn’t even include the cost of installation. It was money well spent, but it was a lot of money nevertheless. If you want all the moving wall functionality without the huge pricetag, IKEA (who else?) might have you covered. For the last couple years, their R&D department has been concepting their own moving wall that could bring transforming interior design to the masses. 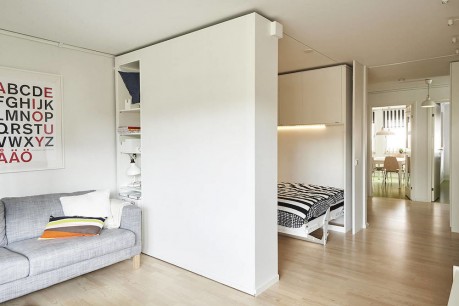 The wall system has been set up in an apartment in Malmö, Sweden. Sweden, like many places, has been experiencing a real estate crunch and IKEA has been looking for ways to bring cost-effective ways of maximizing space. According to the Wall Street Journal, IKEA has let eight families, of varying compositions, take turns living in the apartment. Mikael Ydholm, IKEA’s head of research, says the design team has been tweaking the design as much to the participants’ emotional response as its functional value. Ydholm is quick to point out that the design is still a concept and a good three years out from production.

The WSJ spoke to PKMN’s David Pérez, who knows a thing or two about moving wall. He expressed suspicions about the wall’s viability. “The most important thing is not the movable wall,” he told them. What he is referring to–which are exactly the challenges LifeEdited faced installing our wall–are the myriad other considerations when installing such a large piece of furniture into your space: making sure there is a constant distance between floor and ceiling, making sure your floor can support the weight of the wall, installing supports to make sure the wall doesn’t tip over and especially electrifying the wall. In PKMN’s MJE House that we featured the other day, the moving wall pivoted on an axis, making it relatively easy to electrify (easy for me to say) as their was a fixed point to run electric through. In the LifeEdited apartment, because the entire wall moved, we had to run a retractable extension cord as creating an electrified “third rail” was neither feasible nor safe.

All that said, the concept is pretty badass and I could imagine IKEA producing some sort of simplified, un-wired storage on casters. More than anything, it’s exciting to see such a large company thinking about how furniture and interior design can allow people to extract more function out of their existing spaces.