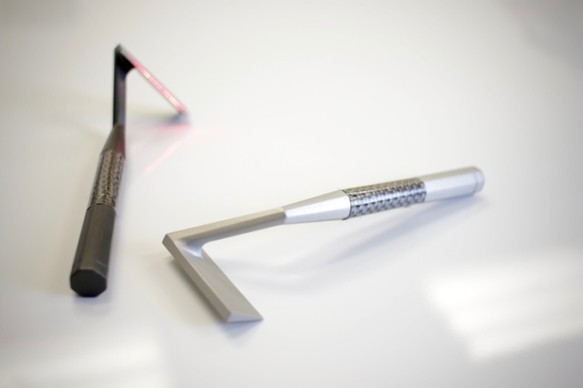 This Might Be the Last (and Best) Razor You Buy

[Update: this product has been banned from Kickstarter for not having an operational prototype. Back to razor burn and nicks.]

It’s a bit funny how things like cell phones undergo nonstop innovation, while other things seem to be innovation-proof. One product that fits into the latter group is the hand razor. Yes, companies want to make you believe they are innovating by adding a fifth blade, achieving a 1 nanometer closer shave (they need something to justify their cartridge’s $8 price tag), but really the basic safety razor hasn’t changed much in the last 130 years since it was invented. A new Kickstarter project might be changing all that. The Skarp Laser Razor uses, you guessed it, lasers to trim your hair, eliminating the need for disposable blades forever.

Skarp claims that 2 Billion razors or razor cartridges are tossed in the US alone each year. Skarp uses a special laser to be completely blade free. Here’s their explanation as to how it works:

Wavelengths of light had already been discovered that could cut through dark hair, but finding a way to cut light hair was proving incredibly difficult. After years of research & development, they discovered a chromophore in the hair that would be cut when hit with a particular light wavelength. Chromophores are particles that absorb certain wavelengths (colors) of light. This chromophore they identified is shared by every human, regardless of age, gender or race.

This chromophore is the one they use in their razor we can assume. It is claimed to be totally safe to the skin and eyes. In fact, because it doesn’t make contact with the skin, Skarp doesn’t cause the same rashes and irritation commonly caused from normal razors.

The laser is said to have a 50,000 hour life (probably a few generations worth of shaving) and runs off a AAA battery. The prototype has a gorgeous machined aluminum shaft that looks worthy of the ages.

Apparently people are ready to ditch their old razors. Skarp set a funding goal of $160K. As of this writing, they are at $3.7M. A pledge of $189 will get you one of the razors. That’s a bit of scratch for a razor, but would pay for itself fairly quickly if you are a regular shaver using premium blades.

UPDATE: A READER POINTED US TO THIS REDDIT POST QUESTIONING WHETHER THIS PRODUCT CAN ACTUALLY DO WHAT IT’S CLAIMING. IF YOU’RE CONSIDERING PLEDGING, YOU SHOULD PROBABLY READ THE POST FIRST.