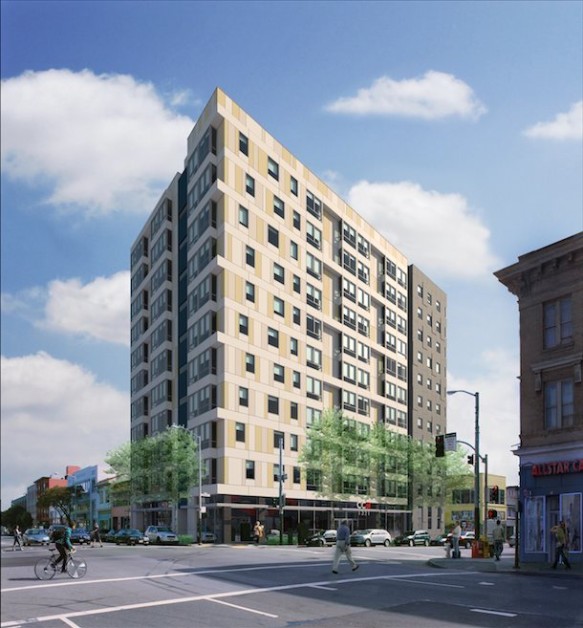 A while ago we checked out San Francisco’s SMARTSPACE Harriet (i.e. the first smartest space in San Francisco), a four story, 23-unit building made up of prefab micro-apartments. SMARTSPACE Harriet was and is significant as it, along with Vancouver’s Micro Lofts, was one of the first true micro-apartment buildings in the modern sense of the term. The vigorously designed 295 sq ft apartments employed numerous transforming elements that made them perform like much larger spaces. The inclusion of things like a building car-share, communal spaces and solar hot water made them all the sweeter. Now (well, for a while actually) SMARTSPACE developer Panoramic Interests is building on its initial project. “The Panoramic” is a 160 unit, 11-story building going up in San Francisco’s SoMa District and it represents a lot of big ideas in small building and living.

The building will feature 120 micro-studios, which will range in size from 274-295 sq ft. They will come mostly furnished, either configured with two twin beds or a queen-sized murphy bed/table. There will also be 40 micro-suites on the corners of all the floors; these two bedroom units will range from 605-630 sq ft and not include beds. All units will have features like floor-to-ceiling storage, soaking tubs, extra soundproofing, LED lighting, ample light and ventilation system. All units will have tables that lower from table height to coffee table height, and 60 of the micro-studios will have tablebeds–dining room table/queen beds–as well.

We spoke with Panoramic Interest’s Patrick Kennedy about the building. He was particularly enthused about the micro-suites, which will be less expensive than the studio apartments. “Many people coming out of college can’t afford the micro-apartments and in fact they’re not interested in living alone.” He doesn’t think that most Millennials are interested in the old bathroom-down-the-hall residential hotels like the YMCA that used to be the affordable housing option in the city. “The micro-suites are an attempt to provide entry level housing in a great location for people not making $100k year.”

The building will have many other features: generous “social spaces” with ample seating and a fireplace; smaller lounges on each floor; a landscaped roof deck with views of the bay and San Bruno Mountains; 200 mbs internet throughout; an onsite City Carshare (The Panoramic has no zoning requirement to provide parking); and a 200 bike storage area and repair station. The location scores a 97 on Walk Score and Bike Score (Walk Score’s bike-friendly rating). It’s two blocks from the Civic Center BART station.

Kennedy sees the generous social space as a big asset and an improvement on the Harriet St development. “The [SMARTSPACE] Harriet was on a 3700 sq ft lot so there wasn’t much room for social spaces. The Panoramic has 8K sq ft of dedicated social space, which provides opportunities for creative collisions, spontaneous interactions and all the things that make cities interesting.”

In terms of pricing, Kennedy says he can’t comment just yet. More information will be available closer to the expected June 2015 completion. He believes the apartments should be 30% less than market comparables.

The first five residential floors are being leased to the California College of the Arts as student housing (the twin bed layouts were designed for this purpose). The other floors will go to market. Kennedy mostly sees these apartments as an entry point for people new to the very competitive San Francisco housing market, but he also thinks they will appeal to other demographics.

Kennedy says that normal civilians and non-millionaires are being priced out of San Francisco. “I see micro-apartments as a very important part of cities for Millennials, singles and older people looking for well-designed, central housing they can afford. I’m especially curious to see if older people will be interested in renting [at The Panoramic]. I think they will.” And though he says The Panoramic’s location is not great for families, he thinks the micro-suites like his would work well for small and young families.

In many ways, micro-apartments are only as compelling as the contexts in which they reside. Unlike the dominant big-house building paradigm, which proposes everyone live in a self-sufficient fortress, micro-apartments depend on interdependence–small private spaces are made livable by having big, shared ones; a home gym is traded for a communal one; a small dining room might be easier to bear with 100 restaurants within ten minute walk of your apartment; and so forth.

At least on the surface, The Panoramic checks many of the boxes for both great micro-apartment design as well as a context that supports the less is more lifestyle. We’ll keep you posted as the building develops.