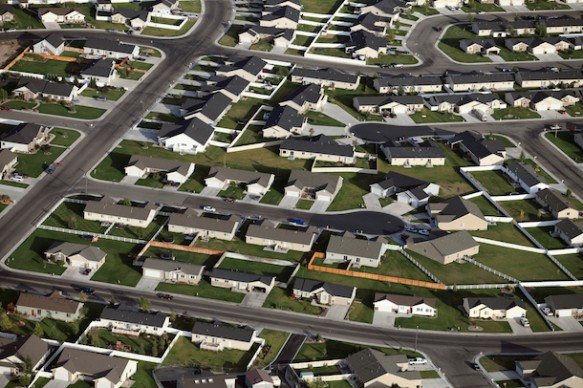 9 Ways to Edit Your Life in the Suburbs

It has been rightly pointed out that we at LifeEdited have a heavy urban bias. We sing the praises of compact apartments nestled in vibrant streets where we all frolick, ahem, walk or bike to world class restaurants, charming cafes and green markets; where cars are only used for the rare road trips to bucolic countrysides; where the reusable shopping-bag denizens create a fraction of the carbon footprint of the national norm.

But sometimes we miss the point. Many, many people live in the suburbs–roughly 2/3 of Americans. Many of them happily. They like their lawns, cars and streets that aren’t punctuated by the sound of sirens every five minutes. They don’t mind doing yard work, thank you very much. They accept and occasionally enjoy their commutes to work. And yet, many of these folks (of which you might consider yourself one) want to simplify their lives. They want to have more time, money and peace of mind. They want to reduce the amount of stuff they have and their carbon footprints. They just don’t want to move to the city.

A while back we wrote a popular post entitled “The New American Dream Home,” which profiled the Kawabatas, a family of four living in a not-so-small suburban home. The post was popular, we believe, because it presented a middle ground between extreme minimalist urbanism and unchecked suburban profligacy.

For the record, if you’re going to move, even within the burbs, we suggest finding a house that errs on the smaller side of the national norm and is close to the stuff you do–work, shopping, etc. But given that most of us aren’t going to move any time soon, or not based of some bloggers suggestion, we thought we’d offer a list of things you can do–some simple, some more involved–to create an edited home whilst living in the burbs.

Do you live an edited life if the suburbs? What would you add to this list? Let us know in our comments section.