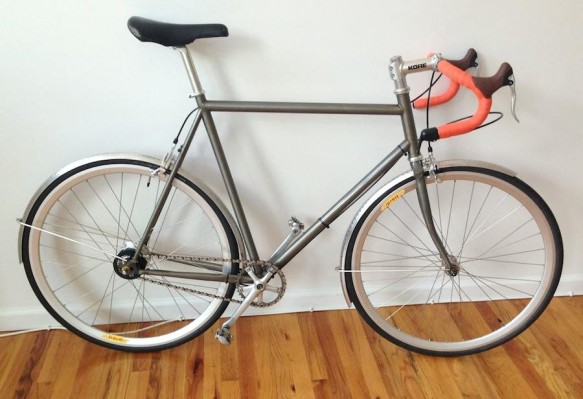 A Case for Buying the Bike You Want

We don’t do–or at least haven’t done–car reviews on this site. One reason is that car companies aren’t exactly eager to have us dole out opinions about their new turbo-charged super-sleds to a bunch of design-oriented minimalists who err on the thrifty side. But another reason is that we don’t like cars very much. Sure, they get us around. Some of us even have them (this author shares a well-used Honda Element with his wife). But our relationship with them is one of tolerance and necessity, not adoration. Cars are expensive, dirty, promote sprawl and have many moving pieces that tend to complicate life. We appreciate that many of our lives cannot function without owning a car, but if workable with your lifestyle, we recommend selling your car and picking up a car-sharing membership instead.

Bikes, on the other hand, are a different matter. Maybe it’s because they are the world’s most efficient form of transportation, or because they condition our bodies as they get us to our destination, or because we need somewhere to place the fetishism we had for cars in our youths–whatever the reason, we love bikes.

When we test drove the Schindelhauer ThinBike last week, we received a few comments about its $1500 price tag. We notice people tend to balk when a bike’s price goes north of $1000–a figure that seems orders of magnitude greater than the $60 Murray of our youths. While we won’t deign to say how much you should or should not spend on a bike, we will make this recommendation: Don’t be afraid to buy the bike you like and will ride…even if it cost more than $1000.

There are some technical reasons why you should consider an upgraded bike. Cheap bikes tend to be cheaply made; they often have crappy bearings and seals, stamped (not forged) metal parts that bend, steel rims that rust, brakes that barely stop, frames that weigh a ton. And before you say you can’t tell one bike from another, test ride an expensive bike against a cheap one. See if it doesn’t ride better and is not easier to pedal, shift and brake.

There are also intangible reasons why you should consider an upgraded bike. In an edited life, one where most everything you have is necessary, it’s important that the stuff you have is the stuff you love and will use. Every item you have needs to be a starter, not a second-string player.

This longwinded preamble was really just an excuse for this author to show off his new bike.

Before I put it together, I had two bikes: A well-worn road bike with a slightly buckled headtube and a mountain bike I was always planning on (but never) riding. I decided to trade both in and get the one bike I wanted and would match my riding needs. BikeEdited, if you will.

The bike is built around a very basic chomoly-tubed frame by a company called Murphy Himself (I think it’s one guy actually). I chose it because it has multiple eyelets where I could install fenders and a bike rack for a baby seat or touring. I like it’s clean, decal-less look. It’s not particularly light, but I’m not riding competitively so why should I care?

(As an aside, if you are overly concerned about bike weight, specialized equipment or having the latest and greatest equipment, you must read Grand Petersen’s “Just Ride.” Petersen is the founder of Rivendell Bicycle Works and debunks many commonly held myths amongst ‘serious’ cyclists, such as the necessity for clipless pedals, padded shorts and carbon frames.)

Like I mentioned, a big priority was having full fenders. Even light rain on a fenderless bike can create a huge stripe up your back. I wanted to make sure I was fully protected. Clip-on fenders tend to rattle off and provide incomplete protection, so I purchased a set of Velo Orange hammered-alloy full fenders that fit and look great and provide ample coverage. 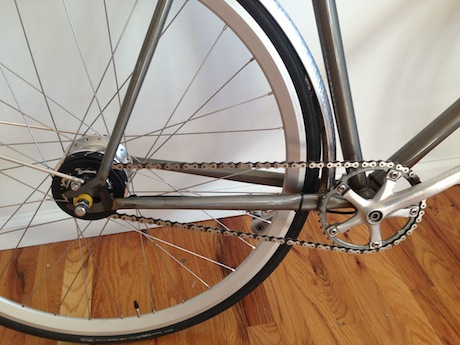 Next, I wanted a bike that was almost maintenance free, so I decided to use a Shimano Alfine internal 8 speed rear hub instead of a derailleur-based drivetrain. It’s a bit heavy, but it shifts flawlessly and 8 speeds is enough (don’t ask Petersen what he thinks of 33 speed drivetrains). Because I wanted to use drop bars, I purchased a bar-end shifter from a company called JTek Engineering. 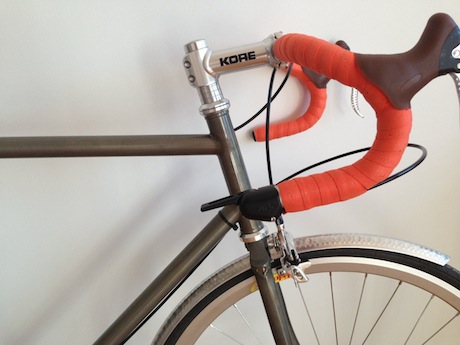 The rest of the bike is a smattering of new and old parts stripped from my previous bike: A Dura-Ace crank, Mavic front hub, Velocity Deep V rims, Panaracer tires, Ritchey seatpost, Selle San Marco saddle, Cinelli bar, Kore stem, Tektro brakes. When all was said and done, the bike cost around $1400 (I saved a little money using old parts).

I love the way the bike rides, fits and–I’ll admit it–looks. I make up excuses to ride it. And therein lies my point: When we get the stuff we want–whether it’s a bike or a frying pan–we use it, cherish it and take good care of it. A bike just happens to be an important piece of stuff in our estimation. And while this cherished stuff might be a little more expensive (or not), as we like to say around here, “If something costs twice a much, but lasts four times as long [or is used four times as much] it’s effectively half price.”

None of this is an excuse to spend money needlessly. Nor is an excuse for a superfluous upgrade. And many may find a cheap bike they can safely lock outside serves their needs better. Likewise, there are many great bikes under $1000; if you know a thing or two about bikes, buying used can be a sound idea. We’d also be remiss not to mention bike sharing. For many city-dwelling bike commuters, systems like NYC’s Citi Bike effectively eliminate the need to own a bike at all.

For the rest of us who don’t live near a bike sharing system or have long distance commutes where a personalized bike makes a difference or just like riding our own bikes, we think making an investment on a bike you love and will ride is a good one.

[Full disclosure: In my previous life, I worked at five bike shops, crossed the US and a few other countries by bike and have generally been an advocate of bicycles.]