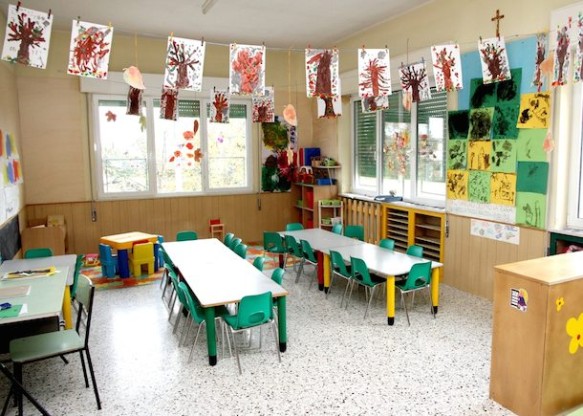 Enter many children’s classrooms and chances are you will be visually assaulted: walls are lined with construction paper turkeys, world maps, posters advocating the consumption of celery and so forth. While this visual maelstrom might strike most of us as a normal and age appropriate aesthetic, it might not be the one that’s conducive to learning. A recent Carnegie Mellon University study suggests that a visually busy classroom might hinder a child’s ability to retain information and stay focused.

The study involved two rooms: one that resembles a normal classroom, replete with posters, artwork and other visual ephemera; the other room was devoid of those things. Researchers observed 24 kindergarteners over the course of two weeks, during which time the students were presented with six new lessons. Half of those lessons were taught in the normal classroom and the other in the undecorated room.

Rather than providing a rich learning environment, the heavily decorated room provided rich distraction as evidenced by the study’s findings. According to a Science Daily article on the study:

Children learned in both classroom types, [but] they learned more when the room was not heavily decorated. Specifically, children’s accuracy on the test questions was higher in the sparse classroom (55 percent correct) than in the decorated classroom (42 percent correct).

The likely reason for this performance falloff is simple: the stuff on the walls didn’t have anything to do with the new lessons. That map of Europe doesn’t help a kid when she’s learning arithmetic. As such, the irrelevant visual information diverted the student’s attention from the lesson at hand.

We don’t want to wax too conjecturally about this study’s findings, but it does seem to attest to the finite nature of the human attention span. We can only pay attention to one thing at a time, and in this case, a child’s attention to a poster displaced her attention to a new lesson. This might be valuable information in thinking about how our spaces’ décors relate to their intended purposes. Do those piles of papers on our desks prevent us from focusing on our work? Does that clutter in the corner of our living rooms prevent us from relaxing? Whether going about our affairs or decorating our homes, this study suggests that the things that aren’t adding to the things we are trying to do are likely detracting from them.