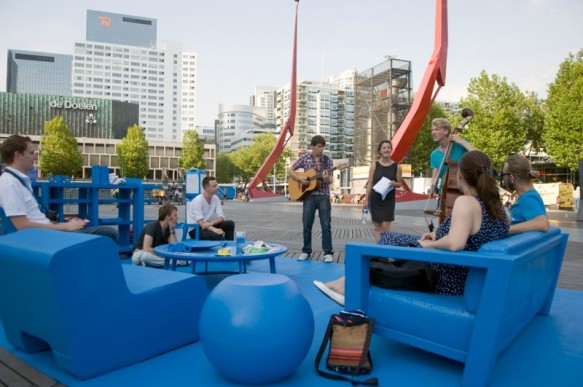 Few people are truly introverts (at least according to Myers-Briggs); this aligns nicely with living in small spaces. Because small homes lack big private spaces, we can use our “cities as living rooms.” Living outside in our cities is more space efficient and, importantly, more social than holing up in our private living rooms. When’s the last time you unexpectedly ran into a friend in your living room (and no, online encounters do not count)? But let’s face it, typical city furnishings–benches, tables, steps and the occasional lawn–are seldom as comfortable as our living room’s comfy environs. A couple projects are changing that situation one sofa at a time.

The first project is the aptly-named Urban Living Room. The project is the brainchild of artist and organizer Studio ID Eddy, Powerboat and designer Bas Kortmann. The three made a popup living room that, according to their website, “challenges the way public space is treated.” The living room, set up in busy city centers, offers both temporary repose where strangers and friends can meet; it also offers a space for performances and workshops (does your living room have that?). 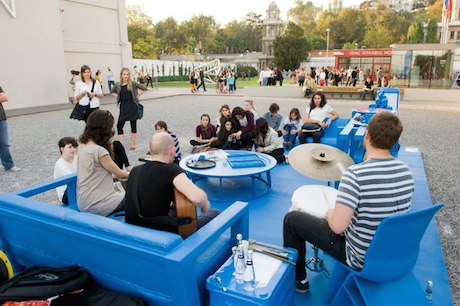 The furniture serves as both a place to rest and design showcase for Dutch designers. The smurf-blue color is a way to provide visual relief from the cityscape; it is also the color of the polyurethane coating that protects the furniture from the elements. ULR tours throughout Europe. Its next stop is Barcelona. See its schedule here. 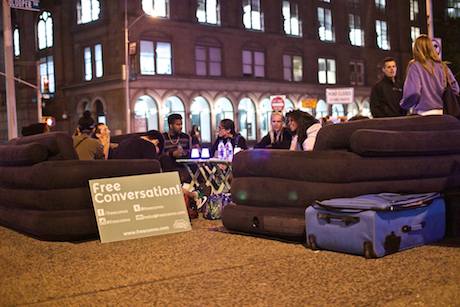 Closer to home is “Free Conversation” which is like a living room pre-populated by a group of interesting/interested folks. We passed by FC in Washington Square Park the other day (full disclosure: my squirrely son prevented my participation). They had several comfy looking inflatable sofas set up where people were chilling and talking.

The project’s co-founders Mike Scotto and Tony Cai are a couple tech wonks who saw the need for folks to hang out and connect on a level deeper than exchanged texts messages. When people get to FC, they are asked to put down their phones and just connect. This is a great thing. Even though cities like New York are ideally set up for serendipitous meetings, the likelihood of that happening is greatly lessened when our heads are glued to our phones. FC brings back the unplanned meeting. All we have to do is stop and sit–something that is occasionally harder to do than it sounds.