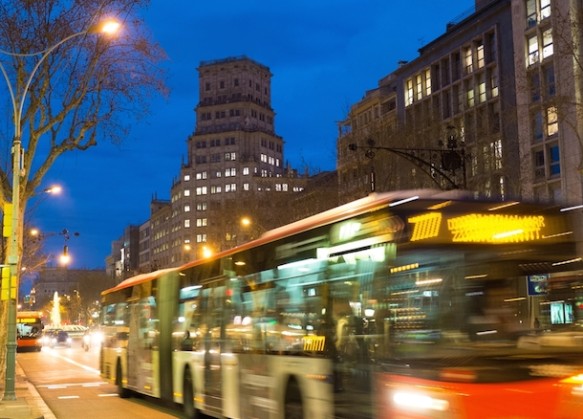 A recent report by the American Public Transportation Association found that public transit use in 2013 was the highest its been since 1956; 10.7 billion trips to be precise. They also reported that “public transit ridership is up 37.2 percent, outpacing population growth, which is up 20.3 percent.”

These are heartening numbers, likely reflecting an overall trend toward urban living, where public transit is far easier to use than sub-and-ex-urban areas. Between 2000-2010, there was a 12% increase in urban growth across the country according the US Census; 3% higher than non-urban areas. There were 2.3M new city dwellers from 2012 to 2013 alone.

Why is this important and what does it have to do with small-space living? It’s important because there is an inextricable link between the type of house we choose to live in, its size, location, access to transportation and our carbon footprint.

As a rule, single family houses are more resource intensive. Their individuated thermal envelopes require more heating, cooling and materials than multifamily dwellings which share walls. More importantly, single family houses have their own lots (the average lot size of a new home in 2013 was 1/3 acre), which pushes them further and further afield, requiring more driving, more gas, more infrastructure to support those cars, etc. Given that 35-40% of the country’s energy needs are from petroleum–the bulk of which goes to cars–living in a house that is not car dependent can significantly reduce your carbon footprint.

It’s also important to note that there are fewer people occupying these houses due to a shrinking household size, a trend which, if it continues, could mean more houses for the same population, meaning more sprawl.

An EPA study published a few years ago called “Location Efficiency and Housing Type” explored this topic in great detail. What they found was that making your single-family house more efficient makes a difference. They found that an energy efficient housee and car can cut your footprint by 34% over a conventional, single-family suburban one. But they found that living in an energy efficient multifamily house with access to public transport–even if you keep your car–can reduce your carbon footprint by 62%. It’s also important to note that multifamily housing units are typically smaller than single-family houses.

The good news is that APTA’s report suggests America is slowly moving toward a multifamily, public-transit-centric housing bias. We say “slowly” because new single family houses are, on average, still pretty damn big. In 2012, the average new single family home was 2505 sq ft–just shy of the 2007 high of 2521, right before the housing bubble burst. One big asterisks is that there were fewer single family housing starts–1.04M in 2007 and 535K in 2012 (though there has been a steady increase in single family starts since a major dip in 2008-9).

That said, 5+ dwelling unit multi-family building starts are up as well to 293K in 2012 from their 97K low in 2009, which, coupled with increased public transit use and the overall trend away from car ownership, bodes well for a less-car-dependent, centralized American population with a smaller carbon footprint.

Long story short, putting all lifestyle benefits aside, if you want to reduce your carbon footprint, there are few things that are more effective than downsizing, centralizing and moving into a multifamily housing situation.