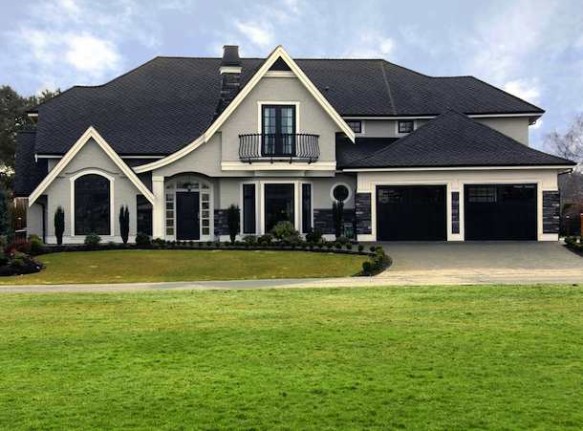 Why Are American Homes So Big?

Yesterday, we mentioned that in 2012 the average new single-family home in the US was 2505 sq ft (median house size was 2306 and has stayed close to average. Full stats here). For a small-space blog, maybe we should have devoted a little more attention to this number as it seems relevant to the future of small-space living. 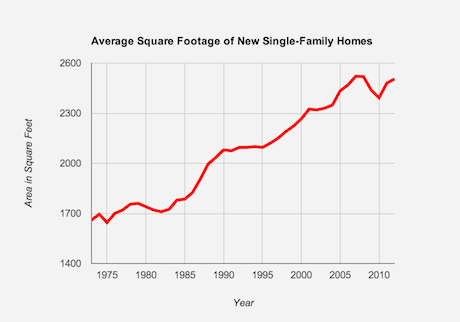 As the above chart shows, after a momentary decrease in size following the housing bubble burst, new homes are close to matching their all time high average of 2521 sq ft in 2007.

What the chart doesn’t show is that the inflated home size is coupled with the persistent shrinking size of the American household. In 2012 the average American household contained a record low 2.55 people–basically 1000 sq ft per occupant of the newly constructed home. Compare that to 40 years ago, when there were 3.01 people per household and the average new home size was 1660 sq ft, or 550 sq ft per occupant.

Prices are up but still down overall. In 2012, the average new, single-family home sold for $292K. That figure peaked in 2007 at $313K. A couple years later, that number sunk to $270K. While this number has steadily increased since the dip, a quick glance makes relative construction costs seem quite low.

This all points to the fact that people build big because they can afford to. With interest rates hovering around 3%, money is very cheap right now for the well-heeled populations who can secure a loan; combine that with cheap construction and energy costs and the financial choice to build big is an easy one for people who already have more money than most. As Lloyd Alter wrote in Treehugger today on this topic, “Money is cheap. Natural gas is cheap. The trades are cheap. What could possibly go wrong?” The only sliver of a silver lining is that it’s fewer, albeit richer, people who are buying these big homes.

We wish we had a “but the bright side is” statement, but we don’t. Basically, a smaller subset of the American population is building and buying as big, or bigger, than they ever had. And cities are growing ever denser without a commensurate increase in multifamily building construction, driving prices higher and higher.

What do you think? Outside of a major economic downturn, what would compel Americans to start demanding smaller homes? Will smaller homes always remain a weird niche in the American housing market? Do you think smart design can have a bearing on the emergence of smaller homes? Or will people always choose more when the option presents itself? Please share your thoughts in our comments section.

Screenshot via The Atlantic Cities