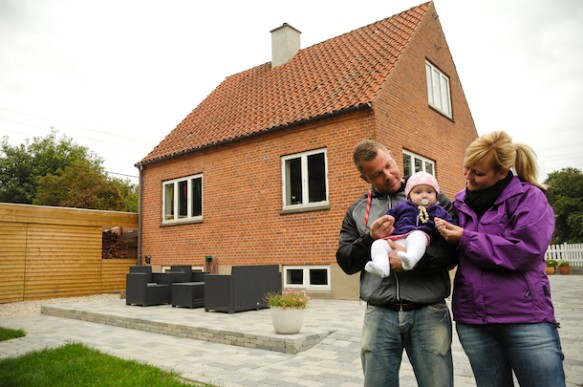 We tend to frame the density issue in terms of housing size, because it’s easy to understand that big homes, as a rule, reduce overall density. But there is something else, just as important as housing size, that must be factored in to understand how density works, and that is household size.

Household size, as one might imagine, refers to the number of people that inhabit a given dwelling unit. If a six person family lives in one house, that’s a six person household. Without household size, it’s almost impossible to understand density. For example, if that six-person household occupies a 1,000 sq ft house, that’s 166 sq ft/person–a number that could rival any micro-apartment (assuming other factors like lot size, foot area ratio, etc are the same).

It’s important to understand household size, because across the globe, the numbers are shrinking, resulting in more houses and less density.

It’s not just the Americans for once. All across the globe–in both developed and developing nations–household numbers are shrinking. For example, the European average is down to about 2.5 people/household–half as many as 100 years ago. 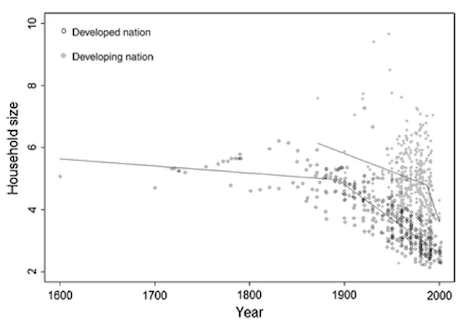 According to a new paper in the journal Population and Environment there are a number of culprits:

Household proliferation is also due to aging, increasing divorce rates, and decreasing incidence of multigenerational households, which may be partly attributable to changing preferences for privacy. Indeed, the number of households may grow globally despite population numbers stabilizing. According to convergence theory, household size decreases (often from >5 to <3) as a society undergoes urbanization and industrialization. This trend largely occurred in developed nations during the latter part of the 1800s. If convergence theory applies to today’s developing nations, billions of households could be formed despite declines in population growth.

Mason Bradbury, one of the aforementioned papers’ authors, gives an idea of what this decreased household number could mean in terms of numbers:

From a more simplistic perspective, declining household sizes, from over 5 to approximately 2.5, will mean approximately twice as many houses will be needed per capita in any areas of the world yet to undergo the shift in household size. If the average household size had been 2.5 people globally in 2010 [developing nations still boast larger household sizes], then the number of households would have been 41% higher, resulting in 800 million additional households…

And according to Atlantic Cities, more homes have more demands:

That’s also 800 million more refrigerators and ovens and climate-control systems, 800 million more homes that need roads and sewage hookups and access to a power grid. If every one of those homes were the size of the average American home circa 2002, the researchers calculate that would mean constructing about 72,000 square miles of new housing on the planet.

As a small space design blog, we’d be remiss if we didn’t mention that the amount of sprawl (i.e. the 72K sq miles) they calculate is based on a house size of 2509 sq ft–McMansions for all.

Which leads to the question of possible ways forward. We see three:

Options #1 and 2 seem like a stretch, so it could be time to start making houses that meet the needs of today’s smaller households.