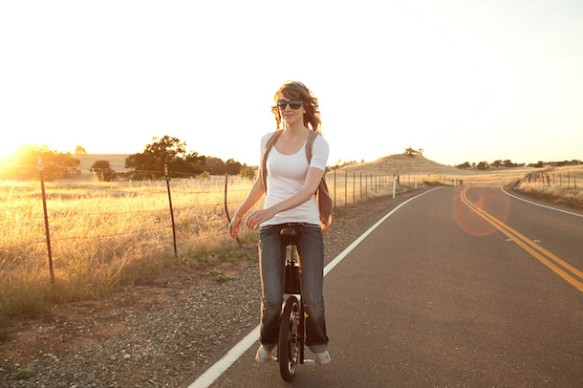 If you can make the leap from four-wheeled car to two-wheeled bike, why not halve the wheel count again? That’s the idea behind Focus Designs‘ SBU V3 electric unicycle. The 27 lb unit does 0-10 mph in three seconds, has a 12.5 mph top speed, goes 10 miles between charges and handles up to 325 lbs of rider weight. Pretty impressive for one-wheeled transport.

The SBU works much the way a Segway scooter does, with fore-aft self-balancing mechanisms (SBU stands for self-balancing unicycle). Left-right balance, on the other hand, is your responsibility. Turning involves leaning your body weight to the desired side. There’s a reverse, that’s activated by leaning forward.

The company says using the SBU is much easier to learn than a normal unicycle (that’s a relief), saying it typically takes between five minutes and two hours to get the hang of it. There is an optional Noob training wheel to assist your learning curve. 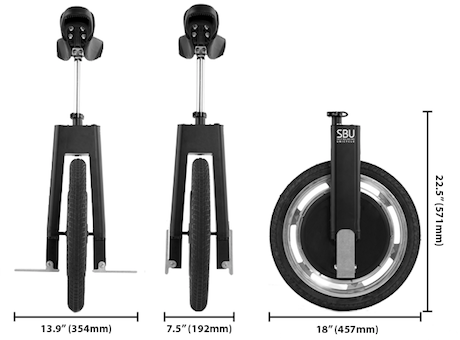 The whole unit stores quite compact: the base is 22″ x 18″ x 7.5″. The basic unit is $1795, plus a $225 charger. Not cheap, but theoretically, if you were to use the SBU on regular basis for short commutes, its expense could be justified (think of it as a faster, electric-assisted, Razor scooter with one wheel and no handlebar…not a good comparison really). 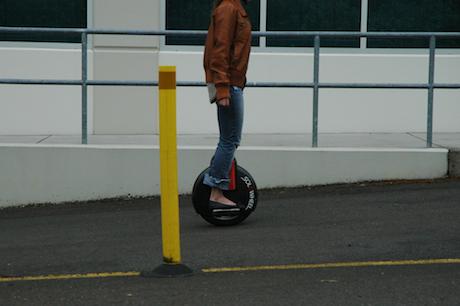 If the SBU is neither harrowing nor small enough for your liking, the SBU guys also designed the Solowheel a while back, which does away with the silly seat. Smaller is not cheaper however. You can pick one up for $1995 on Amazon.

Having never tested either the SBU or Solowheel, we’ll suspend any judgments about their usability. And even though they strike us as a bit expensive, we do see the merits of a mode of transport between walking and biking–something quicker than the former and more portable than the latter.

(thanks for the tip Jonny!)