The Home of the Future or Weird Curiosity?

The England-based Yo! Company is a branding and investment firm that brings Japanese-tinged enterprises to Western territories. Among its holdings are Yo! Sushi, a conveyor belt Kaiten sushi bar in London and Yotel, a Japanese-style hotel with compact-rooms that has locations in London, Amsterdam and New York City.

Now Yo! Co founder Simon Woodroffe is bringing his Japanglo magic to the home market with the Yo! Home. The 800 sq ft London concept home aims to take us out the “agricultural, primitive age” he believes we live in now and into the future–a time when people will ask “do you remember when they had one space and it couldn’t change around?” 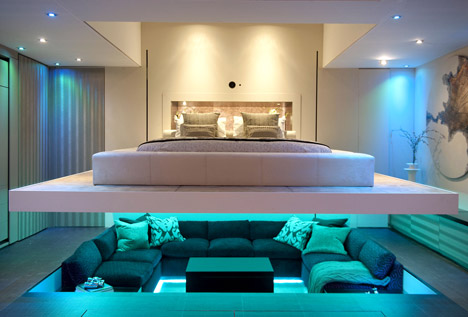 The Yo! Home changes around alright. There is a bed that descends from the ceiling and covers up a huge lounge area. There is a dining area that pops up from the floor; the same floor that hides a wine wine cellar. The kitchen hides completely. The guest room has a large sliding door that opens up to increase the area of the main room. 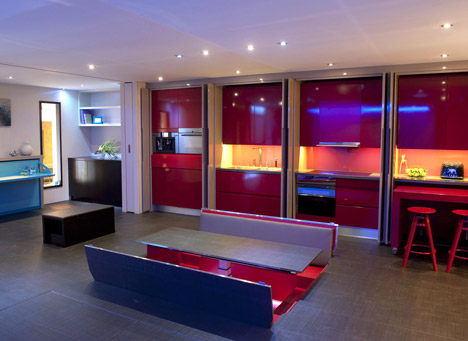 The space relies on a fair amount of automation, some of which broke down during his tour with Channel 4 News (above). To be fair, this is a prototype and breakdowns are to be expected. We do wonder about the long-term implications of an automated home. What happens if you’re really tired and can’t get you bed down?

Woodroffe spent £200K on the Yo! Home (~$325K US), which actually doesn’t seem like a lot seeing as how elaborate the space is. He thinks it’ll initially be for moneyed clients, but believes the technology and designs will eventually trickle down to the greater public.

Our hats are off to Woodroffe and his bold enterprise. Architectural thinking often gets fossilized because structures are imbued with a sense of permanency–so architects and designers avoid risky designs like these; ones that might look weird a few years from now. Concepts like Yo! Home loosen the noose of conventional thinking. They are invaluable idea-generators even if some of its features don’t make the final draft of the home of the future.

What do you think? Is this home the future or a curiosity–something that’ll look weird and overwrought 5 years from now? Let us know what you’re thinking.

Photography is by Ashley Bingham