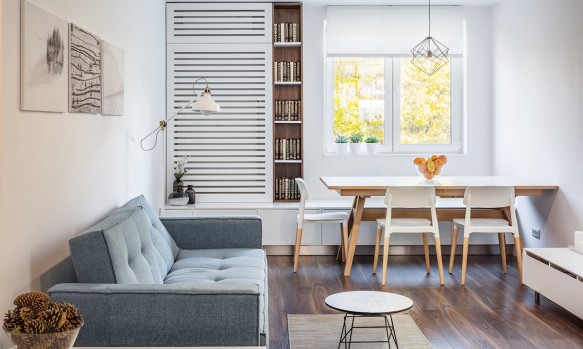 In 2011, LifeEdited founder Graham Hill put out a challenge to design his 420 sq ft New York studio. He established an intimidating design brief: he wanted it to accommodate sit-down dinners for 12, have comfortable lounging for eight, space for two guests with some visual and auditory privacy, a home office and a hideable kitchen. Almost 300 entries from all over the world were submitted. The winning design came from two Romanian architecture students, Catalin Sandu and Adrian Iancu. Their design met all of the brief’s requirements and did so in a sleek, timeless package. Following the competition, Catalin went on to work with LifeEdited, eventually becoming our lead designer. As seems to be the LifeEdited way, Catalin has brought his work home with him. He not only designs great small spaces, but now lives in one. He recently completed a full renovation of the Bucharest home he shares with his girlfriend and dog.

I shot Catalin a few questions about the apartment and how it came together.

David Friedlander: What would you say your overall style is?

Catalin Sandu: I can’t really define it other than saying that I think I’m much more focused on efficiency rather than aesthetics of a design. And even though I always try not to neglect aesthetics, I never design something just for the looks of it.

I was able to get a sense of how to make the space efficient by living in an identical unit across the street for about a year and a half before actually buying and starting the renovation of my current apartment. We love the area and were keen on finding an apartment for sale in those buildings. Living in a similar apartment gave me a lot of time to think about how to actually design it and how to get the most out of the space.

DF: How has your experience working at LifeEdited informed how you designed your home?

CS: Working at LifeEdited had a huge influence on how the layout was designed. Having previously done efficient designs for LifeEdited helped me to get to an un-cluttered layout.

Even though the rooms themselves are not as transforming as in other LifeEdited projects, the home office room, for example, can be adaptable over time: it has more storage than needed for an office so if we ever have a child, the sofa will go away and the space can be used for a crib. After the crib is no longer needed, a folding bunk bed can be placed there by removing the the shallow cabinets right above the sofa.

DF: What’s your favorite part of of the apartment?

CS: I really like the living area, as it is very social. Even though I have a pretty generous desk in the office room, most of the time I actually work at the dining table or on the window seat. I also like the bedroom which is pretty small but feels just right and cozy.

DF: What part of the design are you most proud of?

CS: I’m most proud of the fact that we were able to fit so much functionality and storage capacity in such a small space. It’s a 2BR unit and just 590 sq ft (excluding the balcony) and it has a fully equipped kitchen with dishwasher and washer/dryer, a dining table for 12 [when the table is fully extended, not shown in pictures] and guest sleeping for four people. 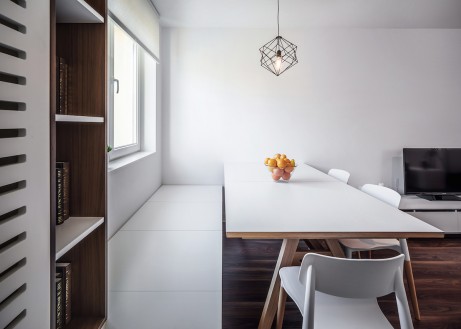 I’m also proud of the window seat. It nicely hides the radiator and AC unit, while providing dining seats for 5-6 people and packing a lot of storage area underneath.

Another part I like is the unusual “cube” bookcase that partially separates the living room from the kitchen. It is not only made for aesthetic reasons but it also hides a rather big stack of pipes that run from the building’s roof to the basement. We wrapped the L-shaped bookcase around two of the stack’s sides.

DF: How long did the buildout take?

CS: The total renovation took about six months. We first saw the apartment in late 2014, bought it in January 2015. Renovation began in March, right after I got most of the permits, and by August the place was about 95% complete with some finishing touches and cabinet doors left to install.

DF: Was it a full gut renovation?

CS: Yes, the place was a mess. At first, the contractor wanted to save some money by keeping the existing plaster on the brick walls as it looked fine. But after they exposed the two walls that were going to be left intentionally exposed, we realized the rest of the plaster could not be kept as it was too sandy and falling off by itself. 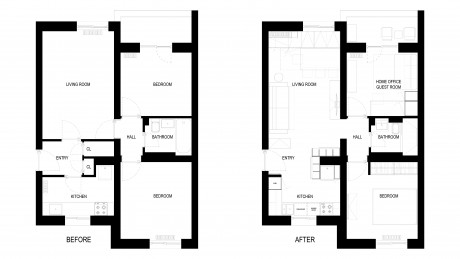 The apartment building was built in 1960, with most of the walls made of load bearing brick. The only partition walls (made also of brick) were separating the kitchen from the initial living room area, creating an entry hall and two walk-in closets. We removed everything that wasn’t structural and got a much larger space living area.

So everything was taken out: floors, subfloors, tiles, electrical, water pipes etc.

DF: How much did it cost?

CS: The whole reno (including custom and off-the-shelf furniture) was about €30K [US$31K] but it is important to mention that I got some pretty good deals on just about everything. The general contractor and the custom furniture teams were part of the same company and I was able to get some deals by doing everything with them.

If it wasn’t for the discounts, I think it would have jumped over €35K.