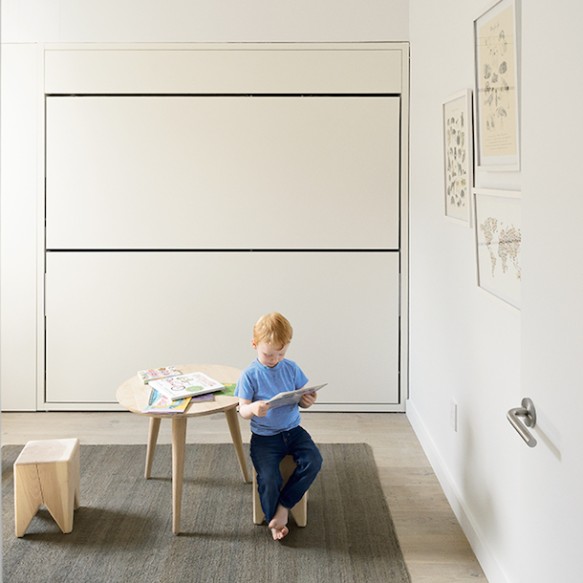 Moving into the place required a lot of removal. Prior to the small 500 sq ft Brooklyn place mentioned before, we were in a 1200 sq ft one. When we moved out of the 1200 sq ft space, our stuff was split between the 500 sq ft apartment and a 500 sq ft studio with a big storage loft that my wife kept for work (you follow?). All of this stuff was transferred to our upstate place. Our possessions included two 8′ dining tables, six large dressers (one was about 8′ wide), six Eames fiberglass dining chairs, a daybed, a large sofa, two lounge chairs, a drafting table, two filing cabinets, a 6′ credenza, a couple stools, an 8′ H x 4′ W bookshelf, two taxidermied birds with glass covers, and much, much more. Our upstate place swallowed all of this stuff handily; in fact the place looked pretty spare. But our new place–less than half the size–would be much different.

Based on the original LifeEdited apartment, we knew we wanted most of the furniture to be built-in, because we not only wanted the space to work, but we didn’t want the place to feel overstuffed. Most of our furniture, save for a few pieces, was not appropriate for the space. We used the maxim that we had to “fit our stuff to the space, rather space to stuff.” In other words, if we had waited for a home that housed two dining room tables, we would have never found anything. Long before we found our new place, we had spent several months selling or giving away the majority of our possessions (we knew whatever we were going to find would be smaller than our previous places). Some of this process I documented on this site.

We really thought the home would make a great demonstration of the LifeEdited design ideas, incorporating less, but better stuff and making rooms do double or triple duty. It’d also contain a kid or two; the absence of kids being one of the chief criticisms made against the micro-movement. We tore the place down to the beams and were basically limited only by plumbing and sewage stacks, money and patience (the latter two ran critically thin by the end of the five month process).

Probably the most essential part of realizing our design goals were the beds. We built our rooms around the Penelope queen wall bed and the Lollipop IN wall bunk beds, both from Resource Furniture. This allowed us to turn the master bedroom into my office during the day and greatly expand the play area in the kids’ 100 sq ft bedroom (we already had one child and were planning a second, who is due in December).

For storage, we removed an existing closet and a nonfunctioning dumbwaiter in the front hallway (actually, the only hallway) and replaced them with an 8′ wide bank of floor-to-ceiling closets. We also had some matching cabinet units from Resource Furniture that fit on the sides of both beds. Because we had gotten rid of so much stuff prior to moving in, this turned out to be more than sufficient space for everything.

Speaking of ceilings, we found the previous owner had put on three–yes, three–layers of sheetrock on the ceiling as an ersatz renovation technique. When the ceiling(s) were removed, we found another 2’4″ of ceiling height. Unfortunately, because we were removing a supporting wall separating the living and bed rooms, much of the height was gobbled up by beams that needed to be sistered to the existing joists to compensate for the supporting wall’s removal. The ceilings still ended up being 9.5′, which gives the place a very open feel.

The structural wall previously had french doors. We took those out and moved the wall back, shrinking the bedroom by 2′ 9″ and expanding the living room by the same amount. We put a large sliding door on the new wall to separate the living room from the bedroom/office. The door itself is sandwiched plywood made by our contractor and attached to a track from Specialty Doors. Because the door is the same 9.5′ of the rest of the space, it creates a continuous ceiling plane, making the bedroom feel like a continuation of the living room, creating one big L-shaped room. 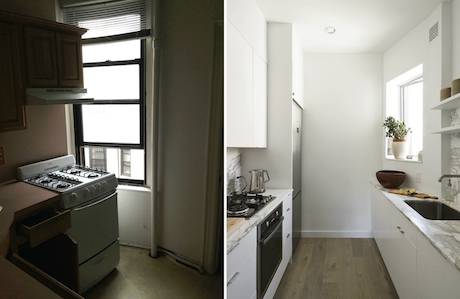 The original kitchen opened into the hallway and had a door to the kids’ bedroom, which we found awkward. We reoriented the kitchen making it a galley facing the living room. This change let light go from the kitchen window into the living room. Other changes included removing the existing tub, which was way too big for the space and moving it against the wall along the window. 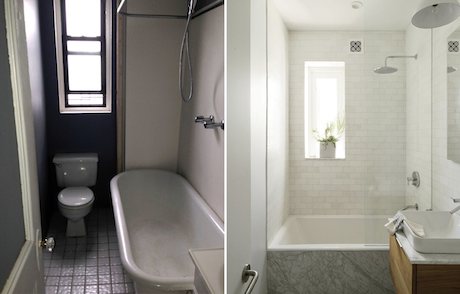 Because of the space’s small size, we were able to upgrade on some of the materials. We used plumbing fixtures by Kohler throughout (mostly the Stillness line) and opted to splurge on marble for the bathroom and kitchen from Ann Sacks. We used sleek, high quality appliances (fridge, range, oven and dishwasher) from Spanish company Fagor. We used IKEA cabinets, because they looked good and, well, they’re inexpensive. Underfloor, were gorgeous Hakwood floors from LV Wood.

Aside from the Resource Furniture pieces, there wasn’t much furniture to buy. We kept our Room and Board sofa and NY folding lounge chair which fit nicely into the space. We found a simple, 39″ round oak table by Canvas Home and a matching 24″ play table for our son (they call it a coffee table). We got some classic Hans Wegner chairs for the dining table and two Kalon Studio wood stumps for our son’s table. In my office we had a small custom desk made and paired it with a Møller chair. Light fixtures in bathroom, living and bed rooms are by Allied Maker. While not furniture per se, we have lush plants from Sprout Home on every window sill, which provides a nice transition to our views of the park. (I’ll detail many of these choices in future posts).

The space came out amazing. Despite its northern exposure in the living and master bed rooms, it’s very bright (helped greatly by a coat of white paint). The minimal amount of stuff makes it manageable and easy to clean. We have more than enough storage. Despite how it might appear on this site, I’m not a small-space zealot. I don’t like waste, and very large homes tend to have a lot of wasted space. What I think is great about our space is that every bit of it is used.

Perhaps the thing I love most about our new home is its location. The park provides a canopy of greenery to look out on and an excellent place to play. We walk down the block to great restaurants. There’s a movie theater a block from our house (that, as newish parents, we have never attended). We run into friends all of the time and there’s a very large community of interesting people (many with kids) in our neighborhood. Our little–though admittedly not ‘tiny’–home made it possible for us to be here.